Josh McDermitt spoke to The Natural Aristocrat® about romance & love changing Eugene Porter away from his tendencies of self preservation above all else.

McDermitt elaborated that without Max Mercer, the old Eugene would likely have already left The Commonwealth on The Walking Dead Season 11.

This Walking Dead interview took place during a press day roundtable over Zoom.

THE NATURAL ARISTOCRAT (NIR REGEV): Eugene Porter was such a logical, pragmatic character all throughout the series until he spiraled into romance. It’s become a weakness in away because he’s always chasing and blindly following their lead. He used to be ‘Dr. Smarty Pants’, creating gadgets on a dime, even being asked to make bullets from scratch. Falling head over heels has clouded Eugene’s judgment away from the best path for his own survival. How do you feel about Eugene straying from solely self preservation?

JOSH MCDERMITT: Yeah, I mean it’s an interesting thing to play. I mean his pragmatism, as you said, was really in the forefront. It was in the front of his brain and now he’s got these blinders on it.

I think it’s really what made him fall for the decoy, Stephanie, he wanted that to happen and to be real. And so that allowed him to kind of overlook some of the other things that if he had just remained pragmatic, he might have caught. It’s interesting now that Eugene’s with Max… She’s in a sense, bringing him back down to earth to where he can actually just see everything for what it is.

I think where we find these characters is they’re confronted with a lot the things that are going on in The Commonwealth and they’re just asking themselves like, “What are we gonna do about this?”

You know, it’s hard to say, I don’t know if Eugene without Max would be there right now. Just because he might have just gone back to bearing his head and just becoming who he used to be years ago. So it’s an interesting turn for the character to have him fight for love and to have that love kind of blind him in a sense, now having to be brought back to Earth.

Josh McDermitt on the constant fear of having your character die on The Walking Dead: You know, we’re all going to fight for our characters and kind of shape where we feel like they should go in what direction. I definitely had strong feelings about how long Eugene survives, which I’ll withhold.

But whether or not he’s ever gonna get killed off. The only thing I ever cared about was being a part of those conversations, because sometimes with these, with the writers, like they’re living with these decisions for months before it’s ever even brought to you. And they’ve made decisions based on decisions, based on conversations and in more decisions. So by the time that it’s brought to you, you may not have as much of a voice as you thought you did. 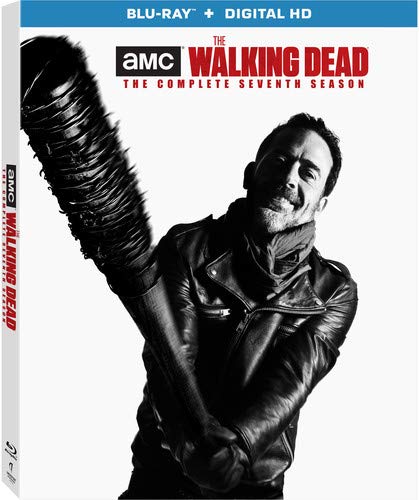 (As of: January 28, 2023 8:25 pm - Details
×
Product prices and availability are accurate as of the date/time indicated and are subject to change. Any price and availability information displayed on https://www.amazon.com/ at the time of purchase will apply to the purchase of this product.
)
You save: $8.70 (15%)
7 new from $44.755 used from $16.47
View on Amazon *
Studio:
Format: Blu-ray
Running time:
(* = affiliate link / image source: Amazon partner program)

So for me… I would just hope that no matter where I was brought in from the get go, that I’ll be able to help shape where I felt the character should and could end up. But I guess we’ll see. I mean, we have eight more chances to see if Eugene makes it or not. Eugene has taught me to be less selfish in my own life. You know, I never felt like I was a very selfish person, but just to see how Eugene really puts others before him… I was like, yeah, that’s kind of how we should all be living.

THE NATURAL ARISTOCRAT: Thanks Josh!

– Be sure to read our interview with Josh Hamilton on the similarities between Lance Hornsby & The Governor and working with Melissa McBride!

– The Walking Dead Season 11 returns on AMC and AMC+ on Sunday, October 2 at 9:00 pm ET / 8:00 pm Central! What will become of Governor Pamela Milton? Only time will tell.

“Daryl and Negan rush to the Commonwealth to stop Hornsby from going after their families. Pamela deals with protestors demanding justice for Sebastian’s crimes. Mercer needs Rosita’s help to fight a swarm.” Visit the Interviews section for the latest exclusive chats with the top talent in Hollywood and beyond!