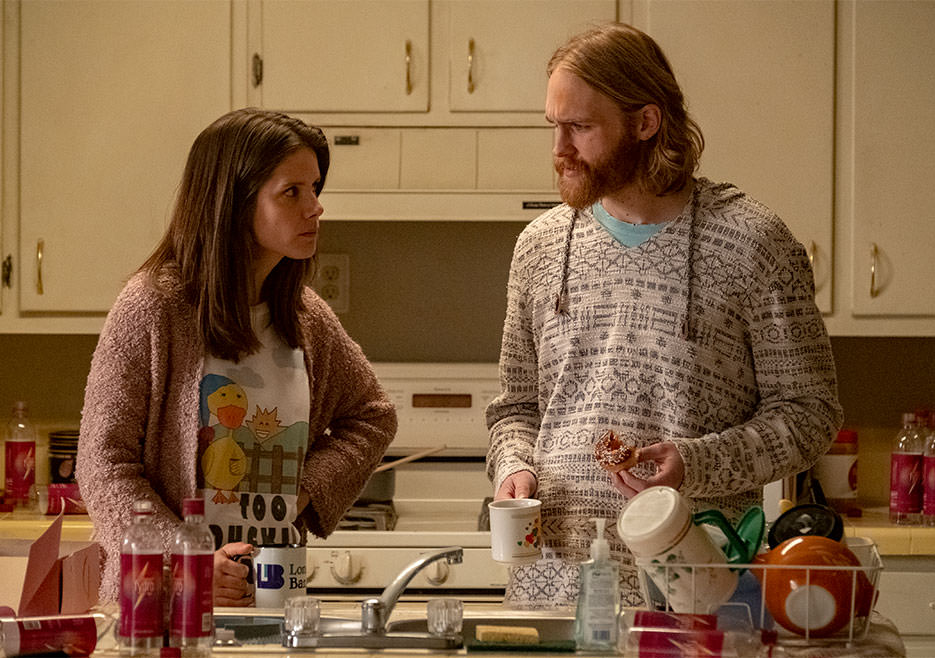 Lodge 49 Season 2 opened with chilled out nihilism, glass half full

Lodge 49 unwrapped the gift of positivity in nihilism as Sean ‘Dud’ Dudley made the best with the lemons life left on his doorstep.

Lodge 49’s Season 2 Premiere conjured up the tranquil, easy going ambience of life spiraling into the depths of abyss. While Liz Dudley (Sonya Cassidy) sees no water in the glass, just a pawned away television set, her brother thinks he just got a refill. And why shouldn’t he? Dud (Wyatt Russell) managed to arise back to surface after a snake bite followed by a shark attack. The freshly bearded one should feel invincible, crutches or no crutches. A warrior, nay a disciple of the religion of Dudeism. A descendant of the lineage established by The Big Lebowski.

The peaches and cream have expired for Liz Dudley, who finds herself looking for direction at the TempJoy job agency. Without a career track to speak of, Liz floats into the position of assistant for an eccentric employer in need of shredding documents. Definitely, not the respected doctor’s office she thought she was heading into. Despite Sean’s dedicated efforts toward lifting his sister’s spirits, Liz cannot find the strength to smile. Sean believing he saw his father that day on the beach was met by a speculative, dismissive silence. To Liz, it was the day she almost lost everyone and everything. The Silver Lining for Dud

Even as Dud sat on a bench abandoned, flaked on, and ghosted by his perceived mentor Ernie (Brent Jennings), he locates the silver lining. When he confronts Ernie on his porch, it’s with great delicacy. Dud is not lacking in self awareness, he acknowledges Ernie is treating him like a stranger since he returned post-surgery. However, Dud still wants Ernie to return to the Lodge. Wearing his friendship on his sleeve, Dud tells Ernie he’ll pick up anytime he calls… Unlike him. ‘Total flakage’ and disregard by Ernie has not broken their bond in Sean’s mind.

When Alice Ba (Celia Au) and Liz show Sean the ‘Pool Party’ store that opened where his father’s store once resided, he genuinely smiles. In fact, Dud offers his services to the family running the place and gets declined emphatically. They cite taking advice from him is like taking advice from the Titanic. ‘No offense.’

At first, the family throws an indirect jab at Sean by calling the old place a dump, not knowing who he is. Yet, it doesn’t deter Sean’s ear-to-ear grin as he keeps his eye on the prize. The crowning prize of cleaning pools in basic blue-collar servitude. However, Dud’s free-flowing lifestyle has been rendered obsolete, replaced by a younger model… An arrogant, brash teenager of few words and lesser empathy. Dud pilfers the pool cleaning tools from the teen’s vehicle to end the episode. Taking his old job back by his own hands, plundering Pool Party. No remorse for the theft.

Scott Miller (Eric Allan Kramer) broke the unpopular news that Lodge 49 members will finally have to pay their tabs at the bar. The proclamation was met with jeering and outright defiance when one member left the meeting instantly. Scott made certain to the unhappy crowd the decision was his own and his power was not usurped by a certain British gentlemen… ‘It’s time we faced reality!’

Connie introduced to Melinda by Clara Connie Clark (Linda Emond) looked mystified and dazed when telling new acquaintance Clara (Pollyanna McIntosh) her ‘brain was melting.’ Clara believed her employer could help her out with the predicament. Connie was then guided blindfolded as per procedure to the mysterious Melinda…

Get our Lodge 49 Season 2 live stream details and catch up on Lodge 49’s first season on Amazon.

Be sure to check out our exclusive Pollyanna McIntosh interview on her film Darlin’ featuring her fellow TWD cast mates. Connie called Scott’s Hail Mary attempt to win back her heart “beautiful” on tonight’s Lodge 49 but it might as well have been ‘sweet.’ It carried the same underlying meaning and result. Nothing.

Scott Miller was always the responsible one, loyal to a fault, a trusty K-9 always at its owner’s side. But what happens to a faithful dog when their owner abandons them? What happens when an owner looks directly into their mutt’s dying for approval eyes, pupils enlarged, tail wagging in anticipation… Only to inform them they’re being relieved of duty? A worldview shattered into a million pieces, never to be put back together. Disneyifiction had Scott penning lyrics, when words didn’t matter. There is not a single sweet syllable he could have whispered that would have saved the day. Love is not ‘just’.

He did everything right, followed every logical step, and found out his adaption of Disney romance still didn’t get past the draft. His Editor stamped a smiley face sticker on it then threw his heart in the recycle bin. The song was never going to work, it was just delaying the inevitable. The infamous ‘Talk,’ the last moment before complete surrender.

Scott is a broken man, sitting at a bartop, looking to Football to heal him because he was a believer… When society’s utopic portrayal of love was always a mirage, a lie placed in-between a vase of roses. Scott adhered to the rules of romance, looked to them for guidance, while others just put it on the tab. If Ernie and Dud had never fell through that ceiling, the talk with Connie would have stayed the same. In fact, if Ernie never crossed paths with Connie, it would have just been someone else.

Thus, Lodge 49’s Sovereign Protector is now one in name only. No longer a protector of what he holds most dear, no direction, and no reason for finding one. Go back and look at Eric Allan Kramer’s 1,000 yard stare as Scott while heavy metal blares over the speakers. That’s the sight of a man who did everything he could think of and still lost. Scott left everything out on the field but lost his team anyway.

Check out a recap of last week’s Lodge 49 episode on AMC featuring the history of Jackie Loomis! Lodge 49’s latest episode spotlighted Jackie Loomis, who cynically believed her story would be a footnote, if not left with her lover.

‘I’d gotten used to being erased out of my own stories’ – Jackie Loomis. Tonight’s Lodge 49 shed backstory on its audience about Larry Loomis’ mother, Orbis, and the pilfering of the scrolls from Lodge 1 in England. Jackie is presented as a woman keen on stepping aside to prop her lovers’ egos. At one point, she makes a suicide pact with her first romance after Larry’s father passed… After letting him drink his deadly brew, she decides to forego the quaint end herself. However, Jackie leaves behind a diary of her journey and findings on his body. She believed it would be more likely to be found on a man’s corpse, rather than on its own.

The discovery of the diary is made by Blaise, who is superimposed on Jackie’s memories throughout the episode. Meanwhile, Dud is suffering from his unquestioned, cult-like belief in Blaise and his manic state. Dud prefers Blaise’s remedies to the hospital and essentially made him his defacto medical practitioner. Yet, Blaise is no doctor. He pulled out a shark tooth out of Dud’s leg this episode and they both laughed… Despite, Dud’s infection and worsening condition. Who knows the real damage being done to Dud every moment he doesn’t get real treatment?

Liz opening the door to aurora borealis in a snowy wonderland was a great piece of cinematography on Lodge 49 tonight. It was a nice touch to have Liz return to join her friends with snowflakes in her hair to sell the moment. Although the piece wasn’t a major part of the episode necessarily, it cannot be understated for its aesthetic value.

Finally, Scott likely played his last move in marriage chess. He’s been delaying Connie breaking up with him, putting off ‘a talk.’ Scott sang a song from the heart in a last ditch effort to save the marriage in front of everyone. Connie was moved but the moment was ruined when Dud and Blaise fell through the ceiling onto the stage.

However, it’s not completely clear a talk means an end. Connie and Ernie discussed how things aren’t the way they used to be anymore between them on tonight’s Lodge 49. While they both smiled, it felt like that relationship might be heading to an amicable end as well. The decision starts and ends with Connie…

Check out last week’s recap of AMC’s Lodge 49 to catch up on the series! 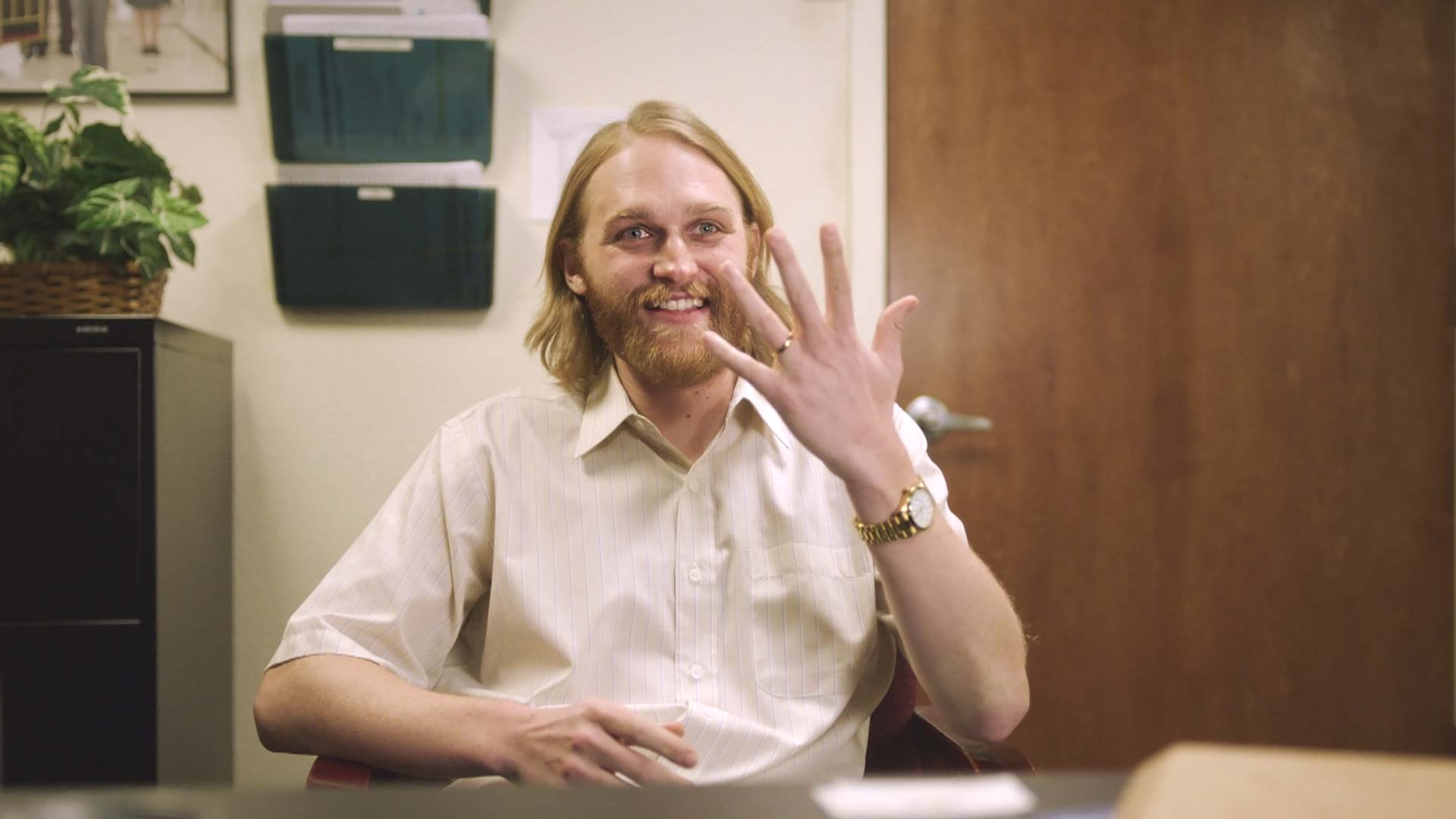 Lodge 49’s “Estrella y Mar” explored the dark underbelly of buyer’s remorse for newlyweds and the first red flags to a decaying marriage.

Ernie commented, ‘Screw fate! Fate takes me places I don’t want to go to,’ on tonight’s Lodge 49… Ominous words. It set the tone for the downfall of Dud’s three-day marriage that he was desperately trying to keep from unraveling. Alone. Dud was a man trying to push a giant rock up a hill but every time he paused to check his leg… All that work just rolled back on top of him because Beth wasn’t around to push it together.

You knew the relationship was on ice when in a Freudian moment, Beth let it slip, ‘It was good she was going back to work because they could spent time apart.’  If a picture is worth a thousand words, Dud and Beth kissing each other on the cheek painted the canvas of a dying marriage. Stillborn in its infancy. It was not a question of ‘if it would work out’ but how long before it collapsed. If marriage vows are said but one party doesn’t acknowledge them, does the marriage truly exist? A question Scott would find himself asking upon Connie’s return. ‘Is there any hope for our marriage? Don’t say anything if there is.’

For Dud, the answer would be a resounding, merciless No. It started at a supermarket errand run at Ernie’s suggestion. Ernie had instilled the thought into Dud’s head that if you truly care for someone, even doing the mundane is enjoyable. Upon entering the supermarket, Beth immediately asked that they split up to save time. A girl that actually cared for Dud saw him at the produce aisle and mentioned a book signing by one of his favorite authors. Implying that they should go together. Beth interrupted the moment but was not jealous in the least, instead she was disappointed Dud chose the ‘wrong’ pears. Dud opened up about his father and how badly he wanted Beth to see the Lodge… Only to discover she was asleep and wasn’t listening at all.

Beth would see the Lodge and it ended the marriage. A moment of insanity by Blaise with a nail gun aimed at Scott also hit Beth’s hand. Spelling divorce for Dud. Meanwhile, Lenore told Liz she was pathetic for trying to find a mother in her… Reveling Liz was just like her father with her criticism and that Liz’ father had dumped her. Rather than the other way around, as she said prior. Liz cried genuine tears for quite a while. Blaise had boarded up his room to end the episode. When Scott broke into the room, Blaise was nowhere to be found. Dud believed he crossed over to the other side. Did he?

Be sure to check out The Natural Aristocrat’s

recap of Lodge 49’s Season 2 premiere if you’re just getting into the critically acclaimed AMC series!