Walking Dead, Darlin’ and Lodge 49 star Pollyanna McIntosh is flying in sans helicopter over to New Jersey this May for East Coast Comic Con! Jadis/Anne will appear all three days of the convention, Friday, May 15, Saturday, May 16, and Sunday, May 17 at the Meadowlands Exposition Center.

McIntosh most recently portrayed Clara in Lodge 49’s second season on AMC and reprised the role of The Woman in sequel Darlin’ while simultaneously directing the picture. Walking Dead fans are patiently awaiting what role Anne will play in the upcoming Rick Grimes standalone film. Anne was responsible for Rick Grimes’ emergency rescue via helicopter changing the course narratively for the entire parent series.

Tickets to East Coast Comic Con itself is purchasable at this link. Entry to the convention is not included with the purchase of a photo-op session. The Meadowlands Exposition Center is located in 355 Plaza Dr, Secaucus, NJ 07094. Hours for the convention are 2 p.m. to 8 p.m. on Friday, May 15 and 10 a.m. to 6 p.m. on both Saturday, May 16 and Sunday, May 17. 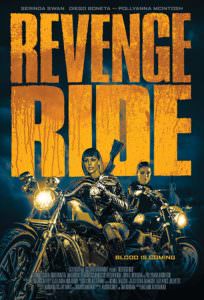 Pollyanna McIntosh stars in Melanie Aitkenhead directed film Revenge Ride as character Trigga. The film’s plot reads as ‘a teenage female joining an all-female gang and getting revenge on a group of American football players.’ The movie’s status is currently completed and set for release sometime in 2020. McIntosh is featured prominently on the poster riding a motorcycle alongside film co-star Serinda Swan (Maggie).

The Scavengers’ leader will also be reunited with Walking Dead co-star (and Jadis’ ultimate nemesis) Steven Ogg for film The Moonshine Gang of Cheyenne. Pollyanna McIntosh will play the role of McKinney opposite Ogg’s Jack McGovern.

On the film’s website, TheMoonShineGang.com, the picture’s plot reads as “The Moonshine Gang of Cheyenne is a western/horror set in 1879 that tells the story of two men in the wrong place at the wrong time; a Bounty Hunter named Jack McGovern and his nephew Seth who are currently transporting outlaw and Moonshine Gang member Charlie Sanders through the Black Hills of South Dakota.” No official release date confirmed as of yet.

Be sure to check out The Natural Aristocrat’s Interview with Pollyanna McIntosh on Darlin’, The Woman author Jack Ketchum, The Walking Dead and much more! Darlin’ is now available to stream free for all Prime members on Amazon and can be purchased on Blu-ray at Best Buy.