Tonight’s Homeland episode “Chalk One Up” was groundbreaking TV. Rarely does a television series so perfectly capture and mirror reality that you’re left feeling like you just watched a live news broadcast.

This review contains spoilers for Homeland Season 8 Episode 4 (“Chalk One Up”).

Peace lost its wings on Homeland tonight when President Ralph Warner’s helicopter disappeared off radar in Afghanistan. It was soon discovered to have crashed in one of television’s most eerily surreal moments ever. There’s no two ways about it, anyone watching was instantly reminded of the recent Kobe Bryant tragedy that took the lives of nine. The fact “Chalk One Up” was written months in advance and features the U.S. announcing a historic peace agreement with the Taliban during the same week of airing was already out of this world. As if Nostradamus was on the writing staff himself.

Warner’s helicopter crash symbolizes how catastrophe can arrive without warning of any kind… And it can happen to anyone, the best and the worst of us, the elite ruling class, the poor and forgotten. Tragedy doesn’t discriminate based on your status. It can’t be lobbied or reasoned with. Netflix’s Ozark once touched upon this concept when Marty Byrde speaks about the inherent hypocrisy of the phrase, “Everything happens for a reason.” Horrific things happen to good people unjustifiably every day and vice versa.

For years, Presidents have been seen as larger than life, practically mythical figures on television. Superhuman-like defenses, wall to wall body guard protection, a walking, talking human fortress with cannons at his fingertips. Typically there’s some dramatic, gradual build up to their eventual elimination. As with 24’s President Palmer (sniper opening after five seasons) or a bombastic Hollywood-esque opener like on Designated Survivor. But on the latest Homeland, we have no marker getting us ready to process or grieve. Nothing hinting that Warner might be at physical risk. This time around, a show mirrors what would happen in real life. Saul Berenson is pulled aside and told the President’s helicopter cannot be found in private. The worst is thought immediately but as humans, even the most cynical of us need the certainty of a confirmation. A search helicopter soon locates the remains of President Warner’s helicopter and it appears there are no survivors. Just like that, President Warner is gone. Earlier on “Chalk One Up” he’d mentioned being told not to make the trip in-person but what is a President if not on the front line with his men.

Typically in cinema, this Patriotic-styled bravado is always rewarded. The worst fears are proven to be just that, and the character of the President rises above as a leader. The bald eagle. A testament to George Washington himself… Not this time. Homeland surprises viewers by proving the advisors right, it was too dangerous to make the trip after all.

Dissidents to the peace agreement are seen holding a rocket launcher close to the crash site of President Warner’s helicopter. All during a ceasefire no less. It appears they shot down the helicopter, burying years of negotiation into the next century. The scene leaves viewers feeling strange, like they’re watching the actual 11 o’clock news. Brutally realistic. It shows the ultimate vulnerability of every individual person in the face of chaos. Akin, to what happened to Prime Minister Yitzhak Rabin and Israel’s peace process in some ways. Everything agreed to, gone, just like that. Before the ink even dries. No rhyme or reason. A day of celebration turns to national mourning. (L-R): Sitara Attaie as Samira and Omar Farahamad as Bilal Khan in HOMELAND, “Chalk One Up”. Photo Credit: Sifeddine Elamine/SHOWTIME

Showtime’s Homeland was multi-layered tonight, not a one-trick pony overly dependent on the gravitas of the episode’s conclusion. It featured an unforgettable plot line about Samira Noori’s brother-in-law arriving for a sudden unexpected visit at her door. At first, everything appeared innocent enough, Samira’s brother-in-law Bilal Khan was just checking up on the status of his deceased brother’s widow. Presenting Samira with his mother’s baked bread as part of the exchanged pleasantries.

The ambience soon changed dark when Bilal started being more forthcoming about why he was really there. Prior, Bilal hinted at how Samira had been away from their home village for long enough grieving, that she was family and missed.

Bilal attempted to grab Samira’s hand and proposed he would take care of her like his brother did back home. When Samira told Bilal “Thanks for the bread” explicitly indicating the end of the conversation through unspoken body language, Bilal accepted and left… Only to return and knock on the door, pleading forgiveness for offending her. That he’d made a mistake being so forward. The words got to Samira and she opened the door ajar slowly… Only to be greeted with Bilal and two other Taliban members demanding she pack her things and come with them. Literally, opening the door to her own capture. Samira panicked and called Carrie in a final act of desperation under massive duress. In turn, Carrie convinced the driver of their fake motorcade to break protocol to save Samira’s life. In a 24, Jack Bauer styled moment, Carrie placed a gun to Bilal’s head as he tried to get his car running, “Don’t f****** move!” Carrie’s driver got out to provide backup as the Samira was moved over to Carrie’s government vehicle in a rescue for the ages. Every running minute of the plot line had a sense of immediacy, you can’t buy that kind of tension. The visual alone of Carrie pointing the gun as Samira walks to freedom says everything. Thin line between tradition and oppression. Just look at that photo above, and the lead photo of this article. It tells a million stories in a one second capture. 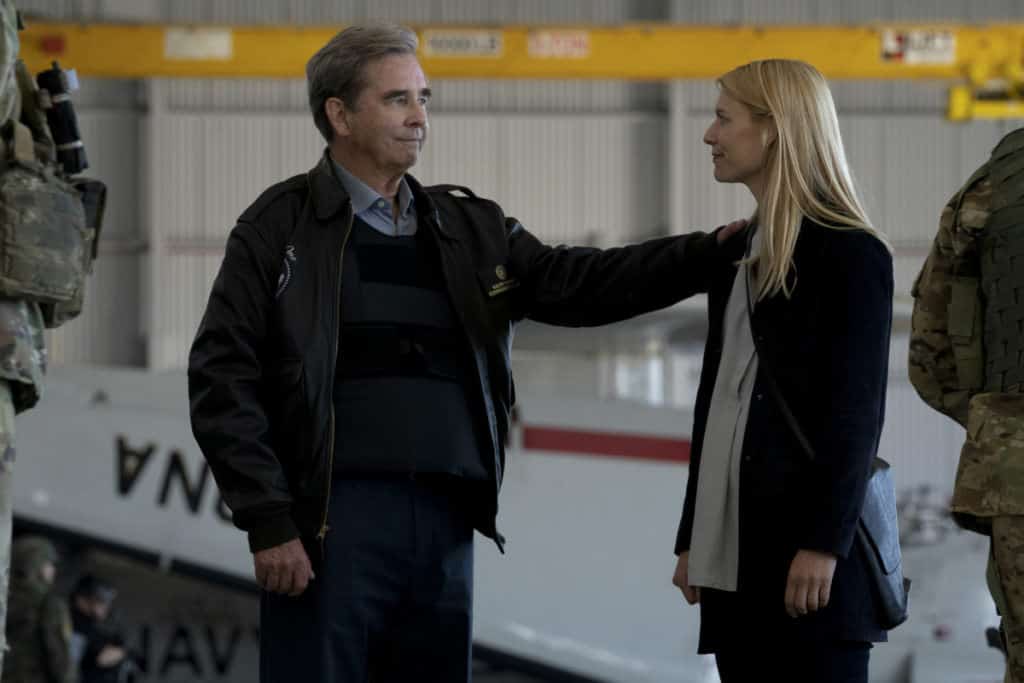 A pivotal plot point occurred early on during Homeland tonight, President Ralph Warner chose to meet Carrie Mathison in-person to thank her for everything… Privately. Warner went above and beyond, thanking Carrie not only for her help in making the peace process happen but his very Presidency. More importantly, Warner acknowledged the pain of Carrie being essentially a P.O.W product of espionage in Moscow for the last year. Carrie was finally treated like a valued agent instead of a potentially compromised traitor since her release. She was thanked for her service instead of spied on.

However, since Carrie is still an active agent out on the field and has vulnerable sources, Warner didn’t want to make the ‘salute’ public. Will this come to haunt Carrie should Warner indeed be deceased following tonight’s Homeland episode? One is only as strong as an asset as her allies, and there are those like the current Vice President who might not feel Saul Berenson’s ways appealing… It’s why the moments that genuinely make us smile should be savored by the millisecond. Falling into unexpected treasure is rare.

Be sure to check out how to watch Homeland’s live stream online every week.