Snowpiercer presented an accidental, climate-based extinction event for cows on tonight’s episode. A chilling reminder of how fragile our ecosystem truly is.

A breach occurred on Snowpiercer’s train carriage slaughterhouse tonight, leading to the extinction of an entire species. Windows shattered as an avalanche introduced cows to the raging, frosty touch of the unforgiving new ice age. The cold seeped inside, turning all organic matter into popsicles in a matter of seconds. You could see life leaving the cow’s poor eyes, trading one misfortune for another. Each door spelling the same end.

Instead of death by a butcher’s knife, their only chance at freedom ending as a mirage. To be defrosted and sold to the highest bidder. An ‘elite’ clientele frenzy, like ants approaching to devour a dropped candy bar. To Melanie Cavill (or Mr. Wilford), the moment represented “An Extinction Event.” From this point forward, there will be no cows ever again. The fragile balance of Snowpiercer’s ecosystem has been disturbed. Since livestock was kept on board only for food supply and none for conservation, one accident was all it took to wipe out a species for eternity.

Strangely enough, one newly introduced character on the series, Breachman Bojan Boscovic [Aleks Paunovic], was elated to have the grim reaper’s frigid hand clasp his skin. He watched in happiness as Melanie and another employee explored the breached train in protective suits, as cold winds damaged his skin instantly. Rejoicing in being able to feel the outside world regardless of consquence. 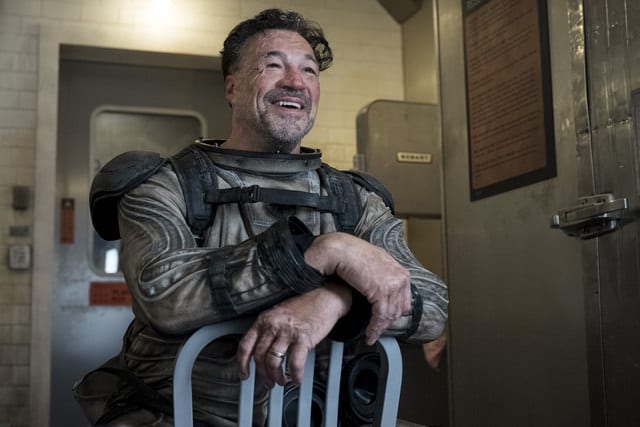 The opening scene of “Prepare to Brace” recalled a ruthless form of punishment seen in the 2013 film adaption. One tailie, a mother, begged for her daughter to be spared punishment and she taken in her place. Her daughter had murdered six of Wilford’s employees on Snowpiercer’s premiere during a Tailie revolt. The mother claimed her daughter’s doing as a result of her poor parenting…. Much to the delight of Wilford Industries employee Ruth Wardell.

Her daughter was returned, and water was poured on the mother’s arm. Then just like in the film, her arm was shoved through a hole in the train carriage to the outside world. Exposed, she screamed in absolute agony as the arm froze. A sledgehammer was used by a Wilford solider to shatter the limb without mercy.

It’s clear Mr. Wilford / Melanie Cavill does not give much thought to the ‘stowaways’ of the tail, always cutting off their electricity (rolling blackouts to the tail) and any other ‘amenity’ first. Wardell’s display of public punishment serves not only as a warning… But as a twisted reminder they should be ‘grateful’ to Mr. Wilford for shielding them from the outside world’s climate.

Wilford serves as an almost deity-like figure aboard the Snowpiercer. Although those that operate the train alongside Melanie Cavill, know the eternal engine is anything but. Though Wilford has kept Snowpiercer humming along, seven years in operation, it’s still governed by the same laws of nature.

Be sure to check out:
– Better Call Saul’s Mark Margolis in big Snowpiercer Premiere scene
– Jennifer Connelly talks Acting, not looking back to replicate past works (Interview)
– How to watch Snowpiercer online via live stream
as part of The Natural Aristocrat’s ongoing Snowpiercer TV series coverage.