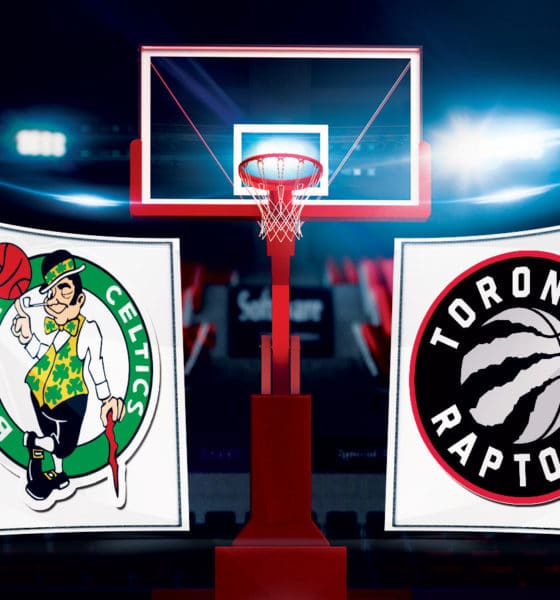 Here’s how you can watch Game 7 of the the Boston Celtics vs the Toronto Raptors playoff series online via NBA live stream at TNT @ 9:00 pm ET.

Will the defending champions advance to the Eastern Conference Finals or will the hungry young Boston Celtics oust them from their throne? Find out by watching an NBA live stream of Game 7 online at TNTDrama.com

The Toronto Raptors’ Kyle Lowry showed great heart, playing with five fouls down the stretch, hitting key shots, and making a game saving dish to OG Anunoby in a double overtime game. Jaylen Brown (31) and Jayston Tatum’s (29) combined 60 points were not enough to close out the series, perhaps because Kemba Walker had an usual 5 point game on 2 of 11 shooting.

Kyle Lowry went 6 of 10 from beyond the arch on his way to 33 points but it was a falling mid-range jumper after posting up late in the game that might have been his biggest shot of the night. Norman Powell was also excellent off the bench for the Raptors, going 6 of 11 for 23 points and 2 key steals (including a major one in the overtime period). The Celtics’ Marcus Smart had a triple double, 23 points, 10 assists, and 11 rebounds. A lot of Game 6 came down to bench scoring with the Celtics having 16 points off the bench to the Celtics’ 38.

The Raptors’ Pascal Siakam continues having trouble shooting from 3 this series, and struggling from the field in general, going 0-5 from three and 5 of 19 overall. Siakam saw more minutes than any other player on the court last, Raptor or Celtics, with 54 minutes. Showing Coach Nick Nurse has full 100% trust in Siakam and isn’t deterred by temporary shooting struggles this NBA Playoff series.

Tipoff is scheduled for 9:00 p.m ET on Friday, September 11 at AdventHealth Arena in Orlando, Florida on TNT. The details to watch Game 7 of the NBA Playoff series online via live stream or on television are available below.

* This NBA Playoff game will be available to watch online via NBA League Pass three hours after its NBA live stream / post-television broadcast.

Disclosure: TheNaturalAristocrat.com is a participant in NBA Store’s affiliate program and may earn a commission if an individual clicks on an NBA Store link in this article and makes a purchase.

Be sure to check out:

– 10 shots that changed NBA history in the last decade

– Is an NBA Championship ring worth an Achilles?