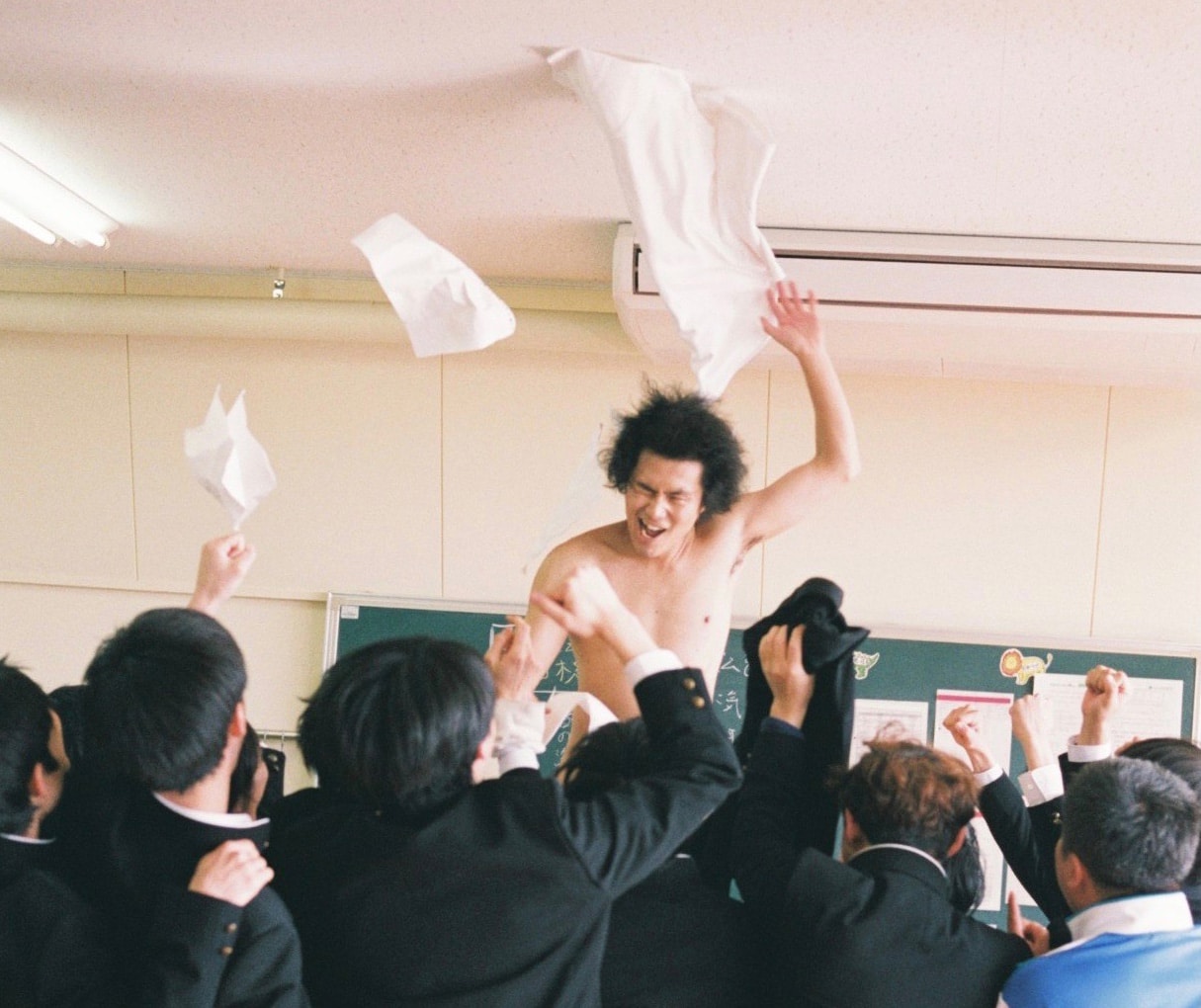 Sasaki in My Mind spotlights how a person’s exterior is rarely representative of their interior. When you first look at Sasaki (Gaku Hosokawa) you see a wild haircut & even wilder personality. A true class clown, dancing naked on top of a desk in class as his male classmates cheer him on… And his female classmates flee the scene to tattle to his teacher. But away from the adoring, entertained eyes of his audience is a boy deprived of parents. Sasaki’s mother is nowhere to be seen, while his father visits once a month at best.

In fact, doing his best not to wake Sasaki up to see him. Sasaki’s house is a bachelor’s mess, littered with cardboard boxes, condiments, and instant noodle containers filling the sink. 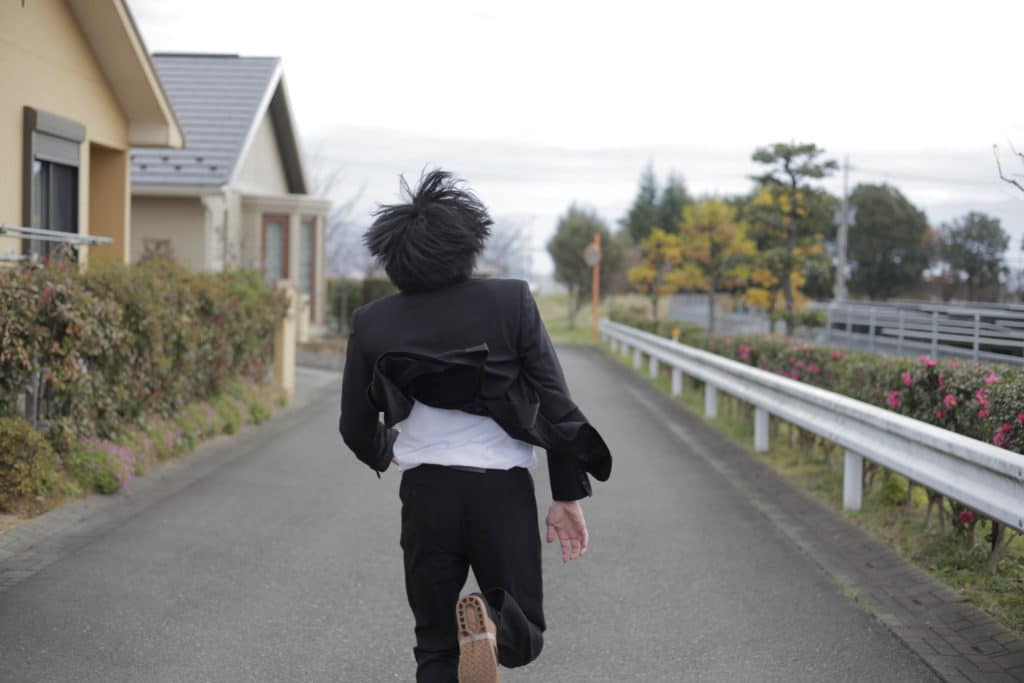 Actor Gaku Hosokawa as Sasaki. As pictured in Sasaki in My Mind. Photo provided by Japan Society NYC.

At one point, childhood friend Tada (Yuya Shintaro ) even discovers there’s a hole in the floor of his room. Which Sasaki quickly rushes over to cover back up. Tada pressures Sasaki to share his instant noodles, completely oblivious to the fact it’s all he has to eat in the house. Sasaki hints as such by calling them his ‘life line’ but relents and shares with his friends anyway.

Naive, Sasaki’s friends regard him as fun but somewhat “idiotic” and laugh at his various antics & cries for attention. Only one of his high school friends, Yuji (Kisetsu Fujiwara) sees another side of Sasaki which he keeps secret from the rest of the group. Sasaki’s father Masakazu is always in and out the door, never engaging in more than a quick “How are you?” with his son. One night Sasaki awaits to find his father had arrived and playing Mario Party 1 on his Nintendo 64. Sasaki asks “Why didn’t you wake me up?” to which his father responds “You were asleep” while smiling.

Though noticeably disappointed at his father’s response, Sasaki asks him to play a round with him. Sasaki’s father agrees but reminds he must soon leave. He would never visit the home ever again. Sasaki later attends a festival with his friends and briefly spots his father in the crowd.

He instantly runs in search of him, deserting the group without explanation but never finds Masakazu. Yuji Ishi goes after Sasaki but is told to make up an excuse to the other guys… As Sasaki decides to go home in desperation that his father will be there.

Sasaki’s father never comes home and in fact passes away shortly afterwards. The homeroom teacher announces Sasaki won’t be attending class for a while to grieve his father but then Sasaki appears. Seemingly undeterred and in good spirits.

Sasaki attempts to get his friend to do the “Sasaki Call”, commenting “Come on, you guys love to make me strip” but they don’t follow through. Feeling a shot to his larger than life ego, you can see real pain on his face for the first time as he yells at them.

Now an orphan, Sasaki’s life only continues unraveling after graduation in strange ways. Becoming a pro pachinko player instead of pursuing a career and generally living a life in-between vagabond and well off gambler. The protagonist of the film is actually Yuji Ishi, the story being told from his perspective. Early on, you discover Yuji Ishi’s life is topsy turvy. His acting career in shambles without jobs.

An ex-girlfriend he still loves and lives with him and keeps promising to leave the apartment in the fall. A dagger to his heart every time he hears it. Yuji’s actual day job is packing soap into cardboard boxes. By chance he meets former friend Tada at his work who immediatley wants to go out for drinks. Tada senses Yuji is not where he wants to be in life and tries to motivate him but it backfires.

Instead, Yuji Ishi grows irritated at Tada’s offer to find new women together and constant criticisms of his career. Well intentioned or not. It’s only when Yuji mentions Sasaki being the same at a high school reunion where Yuji lights up and returns home happy. Reminded of all the good times.

“Your apology hurts the worst.” Yuji Ishi and ex-girlfriend Yuki sit down for dinner after sleeping together the previous night… When Yuki tells him she’s ‘sorry about last night’. That she knew his real feelings and shouldn’t have acted on them. It’s then Yuji Ishi delivers the film’s best line, “Your apology hurts the most.”

Ishi sleeps at his friend Kimura’s (Yusaku Mori) place and discovers Kimura had married his school-time crush Ichinose (Sakurako Konishi). A crush Kimura had once called the ‘prettiest girl in school’. When Yuji Ishi lifts up their baby he begins crying uncontrollably. He runs off to find Yuki, and in a Western film you’d expect Yuji to tell Yuki he loves her as Tada had recommended earlier in the film.

But instead he tells Yuki, he’s moving out too because he can’t bare losing the memories after she’s gone. Instead of this leading to Yuki reuniting with Yuji, she admits to have been cheating on him for months while keeping him in limbo about their relationship selfishly. Brutal.

Sasaki’s gentle side revealed in flashback Sasaki first meets Naemura through Karaoke… Doing his best to make sure Naemura knows he’s not trying to pick her up but genuinely wants to sing with her. Refusing to even ask for her number in a childlike innocent manner after they both had a fun time.

There is a clue that Sasaki is still alive when the friends discuss him looking pretending to be asleep on the floor when Naemura calls them. But the funeral proceeds as normal. Just when the hearse is speeding off, the car stops and a naked Sasaki leaps out as everyone in tears does the Sasaki call!

Conclusion: Gaku Hosokawa delievers a powerful performance, multilayered, and owns every scene he’s in. While Kisetsu Fujiwara’s on-screen relationship with Minori Hagiwara feels true to life and painful. A must watch if you’re looking for a movie that’s gritty, real, and fresh.

– Learn more about Sasaki in My Mind movie screening at Japan Cuts Film Festival at New York City based Japan Society. The film was directed and written by Takuya Uchiyama.

– Go to the Japanese Films section for more coverage of Japanese cinema.