Carice also commented on her relationship with Guy Pearce, joking “Do you see a ring on this finger?” when asked if the pair are married and briefly discussed classic film Memento. THE NATURAL ARISTOCRAT (NIR REGEV): Carice, what does the line “Even God Does Not Forgive” mean to you?

CARICE VAN HOUTEN: Oh geez! There’s a lot of suppressed anger that comes from inside this character.

What it means to me… Even God does not forgive… It’s not good! You’re in trouble when she says that to you. (laughs)

THE NATURAL ARISTOCRAT: What was it like shooting the scene on Dangerous Liaisons Episode 3 where Jacqueline de Montrachet has blood thrown in her face by Camille (Alice Englert)? CARICE VAN HOUTEN: It was funny because well I didn’t really prepare for it. I just prepared mentally that I was gonna have that thrown at me. But of course for Alice (Englert), she was practicing all day with a bucket of blood to aim at me, to aim at my belly. She had been practicing so much and then of course, that one take we have she goes straight for my face! (laughs) I thought this is perfect because it’s actually way more dramatic. And it was a shock to me. So it was also great to act with that.

But yeah, it was sticky. It was not pleasant.

THE NATURAL ARISTOCRAT: Does that stuff take forever to get off?

CARICE VAN HOUTEN: It did, yeah. It was like sticky soy. Poor actors, poor actors, what we have to go through! (laughs)

THE NATURAL ARISTOCRAT: Did you get a kick out of the whole scene where Pascal Valmont (Nicholas Denton) mistakes Jacqueline de Montrachet for someone else and sleeps with them instead? CARICE VAN HOUTEN: I love that scene! But I loved that scene when I watched it. I remember reading it and I was confused.

I was like, ‘But this is the same! Is that me or is he mistaking?’

So it took me a while to even get the joke at first, then I saw it play out and I was like, “That’s really smart. That’s funny!”

THE NATURAL ARISTOCRAT: What was your original audition like for the Dangerous Liaisons TV series? CARICE VAN HOUTEN: My audition? In fact, I didn’t have to audition for this, which was great. I was asked to play this role and I was so infatuated by the fact that they wanted to do this show again from a female perspective and the fact that it was written by Harriet Warner, who I really admire and the fact that the female director was so full of fire about this show.

She was very open and I like to improvise. I like to come up with stuff and I like to be part of the making of everything. So I really enjoyed that kind of vibe. In general, this whole show was to have those two main characters. They’re such wild spirited, beautiful young people that really had a ripple effect on the rest of the cast and of the crew. I think that their chemistry and also their individual talent radiates.

THE NATURAL ARISTOCRAT: I’ve spoken to a lot of actors who’ve told me the importance of getting into character from the costumes themselves. There’s especially a contrast in Dangerous Liaisons between those with privilege to lead and working peasantry types.

I was wondering how it impacted your acting mindset considering your character Jacqueline de Montrachet is mostly wrapped in upscale, pure white attire. Yet, dually attracted to people like Pascal Valmont who claim to be involved with orphanages.

CARICE VAN HOUTEN: It’s funny because with Game of Thrones, obviously I only wear red. So it was very refreshing to wear a different color for a change, but it is very restrictive and of course that is also a sort of a symbol for the whole way these women lived. It definitely helped to build that character. But I’m not so much of a method actor anyway. I always feel like this is just a fragment of myself that I put in. Like I don’t think I become someone else.

I mean maybe this is all subconscious and I sort of don’t know how the process really goes… But I sort of lend myself more to the character than I feel like I’m actually becoming someone else. It’s not really my way.

THE NATURAL ARISTOCRAT: You mentioned before that whole ‘blood on the dress’ scene was done in one take with one dress. You really can only get one dress? There’s no backup replicas if someone messes up?

CARICE VAN HOUTEN: You only get one dress so there was a lot of tension there. And of course on the camera side, they weren’t nervous but they have to be sharp at that moment. 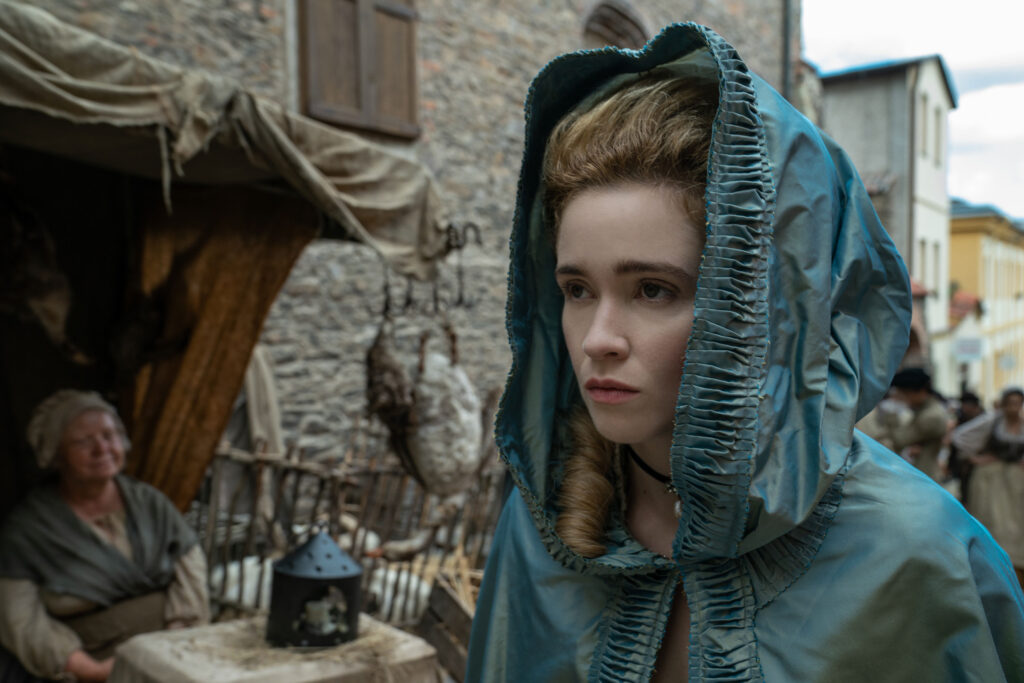 Yeah, could feel the tension, but it’s also what makes the shooting fun because there’s that riskiness about it, you know? That is very much the fun of these jobs sometimes.

THE NATURAL ARISTOCRAT: I wanted to mention, by the way, you’re married to Memento actor Guy Pearce right?

CARICE VAN HOUTEN: I’m not married. Do you see a ring on this finger? (laughs)

THE NATURAL ARISTOCRAT: Oh, I thought you were based on what I saw on Wikipedia!

CARICE VAN HOUTEN: I mean we have a child together obviously, but no, we’re not married.

THE NATURAL ARISTOCRAT: I was about to tell you Memento is my favorite film of all time and the movie that really got me into covering the whole industry.

CARICE VAN HOUTEN: Wow. It is a pretty brilliant film. Yeah, it’s a while ago though.

THE NATURAL ARISTOCRAT: I just wanted to take the opportunity to say that if I had the chance.

CARICE VAN HOUTEN: Yes of course, I’ll pass that on to him.

THE NATURAL ARISTOCRAT: I enjoyed your character on Dangerous Liaisons. You kind of have this more aloof, colder character in contrast to the rest of the cast in the show. CARICE VAN HOUTEN: Thanks! Although I think there’s more to her than aloofness and coldness, but you’ll notice along the way.

THE NATURAL ARISTOCRAT: Definitely, thanks a lot Carice!

– This Carice van Houten interview is also available on YouTube, voice your opinion there as well! Japan Society NYC Film Review: ‘Fireworks Should We See It from the Side or the Bottom?’