Lying on the floor alone, hand trembling… The most powerful man in Chicago. Kelsey Grammer’s Mayor Tom Kane on STARZ series Boss was Antaeus fighting Hercules. Struggling to stay grounded to the Earth, dying while elevated to the most powerful office in the land.

Child, liability, sacrifice. A terminally ill reunion built on the bricks of unconditional love turns out to be hollow drywood filled with termites. Conditional after all.

Mayor Tom Kane’s reunion with estranged daughter Emma Kane was short-lived, crushed by the weight of his office. Kane sacrificed his own blood at the political alter to reaffirm his grip on Chicago’s pulse.

Despite Emma supplying her father with the medication his body needed to function long-term… Mayor Kane’s mind chose to fall back on the familiar thumping of a gavel and rusting throne chair. The creature comforts of repetition. Living for the short term while there’s life to be lived.

It was Mayor Tom Kane’s signature approving toxic waste be dumped where it seeped into Bensenville’s groundwater. The ink dried and so did the health of the town’s children. Collateral damage. Their future chapters wiped clean, evaporated.

Mayor Kane chose the one person who uncovered the truth of the tragedy to fall on his sword for him. Dr. Gabriela Reyes almost couldn’t live with the guilt of what she had done years ago… Until her brother’s brutal murder of a woman was once again used as a bargaining chip.

Kane debased Dr. Gabriela Reyes forever by having her claim full public responsibility for the tragedy. Despite personally knowing his ill health was looming over the office like a dark cloud before the storm. Mayor Tom Kane chose power over his conscious.

3) Tricking Kitty O’Neill to give herself up as mole

Sensing one Kitty had gone astray, Mayor Kane presented himself as leaving the chain of command. Thus setting the wheels in motion for Ms. O’Neill to betray him and reveal herself as a mole. Kitty O’Neill followed through almost instantaneously, informing misguided rival Ben Zajac.

Mayor Tom Kane would lay into Kitty O’Neill, commenting that everything in their 8-year work relationship was given not earned. Kitty reverted into an almost child-like state, as if she had wronged her own father. Never feeling lower on the political totem pole than in that moment.

The upcoming gubernatorial primary ends up being Mayor Tom Kane’s achilles’ heel for Ezra Stone. Though Stone had been Kane’s close advisor for 30-years, he felt Kane had changed post-medical diagnosis.

It was Stone that leaked the Bensenville document to get his boss to step down for the good of Chicago… Feeling Kane had lost sight of the city’s needs over his own.

Ezra Stone would admit as such, stating that Kane had over flexed his political muscle on Governor McCall Cullen. That Kane’s medical condition had led the Mayor on a crusade to rescue & improve his own public image.

At an emotional impasse, Stone advised the Mayor on his betrayal openly… Despite knowing his life was on the line. Mayor Tom Kane would not spare Ezra Stone despite 30-years of service, sending the ‘gray haired man’ (hitman) to eliminate him with dignity. The Zajac campaign gained momentum in front of the cameras for Governor and behind closed doors for Mayor. In turn, Mayor Tom Kane took election day politically and personal from his rivals.

Kane strategically sent scheming Alderman Ross photos of his wife Tia Ross engaging in an affair with Ben Zajac. Impeachment was off and so was the possibility of being Mayor for Zajac.

The good Mayor would also send Ben’s wife Maggie Zajac the photos. Maggie would tell Ben that he’s playing ;a game with people on levels that he can’t even comprehend’. Suggesting he beg for forgiveness from Tom.

Meanwhile, Alderman Ross would punch Ben in public on the night of his primary win against Governor McCall Cullen.

6) Allowing own medicine supplier to be taken out

Mayor Kane’s medical reality is the constant expansion of more pills to his cabinet. When Ezra’s go-to supplier keeping Kane alive became a liability post-arrest… Kane had no qualms about eliminating him without even having a replacement. No pawn too strong a Chess piece.

Similarly, Darius Morrison had no upper hand despite being a replacement supplier and his daughter’s boyfriend. Mayor Kane had Darius arrested in a police raid to show he was hitting back against crime… Again, knowing there was no immediate discreet replacement to replace him.

Literally placing the office of Mayor before his own health. While at the same time, dually squashing a journalist like Sam Miller stumbling upon the story easily.

At first, it appeared pushing the Zajac campaign to gain momentum was Kane’s method of keeping an iron fist on Governor McCall Cullen. But it soon became clear on Boss (STARZ) that Mayor Tom Kane had grown wary of others like him, even disgusted in a way.

9) Forcing Dr. Ella Harris to move to a private residence

Dr. Ella Harris informed Mayor Tom Kane of his fate in the opening scene of STARZ’ Boss. In return, she is forced to change her entire life to revolve around the secret of his diagnosis. Eventually, due to the perception of pressure from wife Meredith Kane and lack of faith in Dr. Harris’ oath… She is fully relocated along with her son into a private residence.

After promising Dr. Ella Harris would never experience any ‘nudging’ in the right direction again. She is met with the threat of her child being taken by her ex-husband in a renewed custody case… Should she say no to vacating her job and home for Kane’s political well being.

Mayor Tom Kane played Ben Zajac like a puppeteer to his marionette. In Kane’s own words, ‘You’re a treasurer who ran two weeks in a primary. Who remembers that?’

Ben Zajac thought he could get away from Mayor Kane owning a part of him… Instead he found himself groveling on the floor in front of Mayor Kane, realizing his grave error of rebellion. Zajac thought he was a few handshakes away from being Mayor of Chicago, instead he was almost out of the political game for eternity.

Seeking one opportunity too many, a buffet of options stunningly turned to one. Serving Mayor Tom Kane.

– Get Boss Season 1 on DVD at Amazon right now! #CommissionsEarned 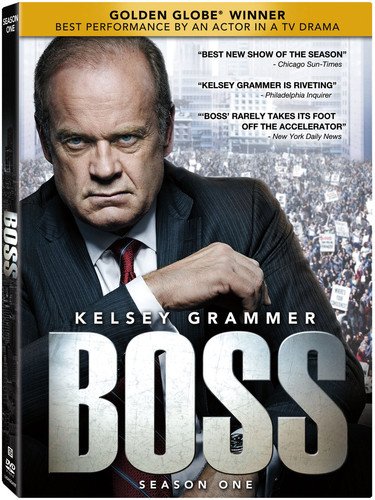 ×
Product prices and availability are accurate as of the date/time indicated and are subject to change. Any price and availability information displayed on https://www.amazon.com/ at the time of purchase will apply to the purchase of this product.

– Check out coverage of more TV Shows like Boss on STARZ on The Natural Aristocrat®! Your new home for Kelsey Grammer news, reviews, recaps, and much more!

– Be sure to read The Natural Aristocrat’s exclusive interview with Lisa Emery on Ozark Season 4!