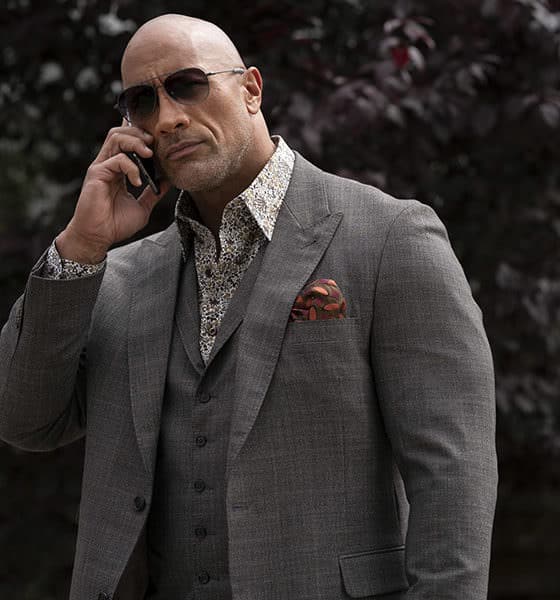 Spencer Strasmore made his first big player signing as defacto GM of the Kansas City Chiefs on tonight’s Ballers episode “Municipal” on HBO.

Spencer Strasmore decided to make an ‘unpopular’ move in the eyes of the NFL as his first order of business on tonight’s Ballers… Signing Kisan Teague. Despite Kisan admitting in a close door meeting with Spencer that he indeed fired off a few rounds that night, that it wasn’t just his friend Cliff… Spencer welcomed Kisan on-board anyway! The honesty actually securing him a place on the Kansas City Chiefs. Spencer told Kisan he believes in second chances but not third ones. Strasmore stood by his opening monologue that sometimes you gotta just say ‘F*** it’ to succeed in life, no matter what people say.

However, there’s red flags all over the move in plain sight. From Kisan stating he’d never abandon his friends no matter their bad influence… To the potential of a video leak of the security tape of Kisan taking aim. The signing could define Strasmore’s entire new career should things go awry. Judging by a call-in to Ricky Jarret’s new SiriusXM radio show by someone looking for the inside scoop on Kisan… There’s more people that know something’s up than Spencer realizes.

Ricky by the way, took the opportunity to bash Spencer throughly as a narcissist on his show’s debut (without a true audition). So much so that Spencer called in himself. Spencer commented he’d be on the player’s side when it comes to bargaining agreements. However, Ricky was unmoved, stating he’ll believe it when he sees it and that Spencer is all talk.

Meanwhile, ‘The Arbiter of Cool’ was not moved by business proposals during a rooftop party held by Sports X. Though he was bored of Lance and Joe’s pitches to him… Kate managed to seclude some editorials by turning on the charm and flirting. Joe grew jealous and depressive until Kate gave Joe a smooch on the lips and he wouldn’t stop smiling.

Reggie came to a compromise with Vernon, sign his $80 million dollar NFL contract and he’ll fund his own eSports team. Vernon agreed, as it kept his pro gamer dreams a reality. The Los Angeles Lakers’ Rick Fox made a cameo earlier telling Reggie, you either have money or talent… The more important one is what you don’t have! Speaking of money, Charles Greane can’t seem to come to an agreement on a contract renewal on the Rams. An omen? If Kisan works out on the Chiefs, will he be relieved of duties?

Check out last week’s recap of HBO’s Ballers to catch up on the series! HBO’s Ballers series finale wrapped everything up with a crisp red bow on top when a season 6 focusing on Spencer vs the other NFL owners would have been a surefire hit.

Do you recall when Tom Cruise once made the term “Delayed gratification” famous in the film Vanilla Sky? Well, Ballers’ Season 5 Finale was the opposite of that notion, it was too much, too soon. From the inorganic way Joe Krutel and Spencer Strasmore have more or less completely made up, bros for life, to the NFL caving in with just the threat of a players’ strike. Even Vernon going back to the NFL after all his bravado about eSports and League of Legends, commenting that it was all some masterplan to motivate Reggie… Felt entirely like a Hollywood by the numbers affair. Miles away from the Kisan Teague death scene that left viewers with their jaws on the floor at the absolute raw nature of it all.

Ballers obviously concluded with the intention of making their viewers feel good but it went a bit overboard. It was too storybook, like an ’80s movie just missing a training montage. The picture perfect Happy Ending. Borderline sappy and candy coated, when greatness in the narrative was just around the corner. Creatively speaking, they should have let it play out on the field instead of throwing a Hail Mary.

Picture an entire Season 6 of the NFL pushing to destroy Spencer’s reputation into the ground in the media for going against them. Spencer trying to lobby other owners to chin up and break away, mostly to no avail, on the brink of losing it all. It’s practically a House of Cards style ready-made season. Just as Kisan Teague’s situation eerily mirrored Antonio Brown’s real life Patriots release, a season of Spencer vs the NFL could have paced rarely treaded ground. ESPN discussions examining how the show intruded on reality, the works. Now, we’ll never know what could have been as Ballers is officially over, curtains down. Last bow to the audience as every cast and crew member moves on to other projects.

All this being said, Ricky Jerret and TTD being behind Spencer’s monologues that overlay the show was an eloquent touch to end the series. A twist that if the series had to see its final season, should have ended with. In Spencer’s words, “Thanks for always being an original!” The message of helping players in the NFL after their bodies have been wrecked, instead of leaving them to the wolves as new pups arrive was a good one. The retired are more than just trading cards, stats, and highlights. Their lives continue even when the lights are gone, sometimes when the money is gone.

In essence, the plot just felt rushed after such a slow burn of a buildup. Kate’s sudden renewed interest in dating Joe. Reggie getting an investment just like that after one tournament from those that looked down at him and Vernon. No real prolonged, substantial conflict between Charles and his wife about health… Lest he continue his work with the Rams. Even the possibilities of Ricky rebelling against the ‘no dirt against the league on air’ policy. These are all lengthy stories that couldn’t see their day basking in the sun because it was the show’s last hoorah. They hurdled right over their obstacles with a 500 ft leap in the air to a storybook ending.

Perhaps, much like The Sopranos’ unexpected abrupt ending it had to be this way. We were in these characters lives for years and just like that, we’re not. As in life, people come and go with or without a credit roll. Usually without.

Be sure to check out more Ballers’ reviews, recaps, opinions and more in the Ballers category section! Catch up on Ballers’ fifth and last season over at HBO GO if you’re a subscriber.

Shot right in the heart. Look above at the photo on this article, see Kisan Teague’s motionless eyes as he realizes the grim reaper is set to descent. The final seconds of his life setting in, the last breath, for the last time. Ever. The look on Kisan’s face says it all. The mind trying to process its own end.

Spencer Strasmore’s overlaying monologue about the past never getting buried… Always reanimating just as you catch your breath, a perfect accompanying piece. Actor Kris D. Lofton’s swan song on HBO’s Ballers was one to remember. Just one episode ago, Kisan was set on keeping his old friends, that they would be there when his NFL career ended. Instead he lost it all, his career, his dreams, his very life for them.

Tonight’s Ballers episode “Crumbs” was in a word, powerful. Maybe it was the fact that Spencer releasing Kisan from the Chiefs surreally mirrored the current Antonio Brown/Patriots news cycle unintentionally. Maybe, it was the haunting moment where a gun was pointed at Kisan. Or the brutal way he looked at the blood seeping from his shirt after being shot… It could have been the way Spencer lied on live television about Kisan looking him in the eye and telling him ‘he wasn’t there that night,’ when he was fully informed of the contrary. No matter what it was it made for an unforgettable piece.

The fact that Ballers was obviously filmed way in advance of the Antonio Brown/New England Patriots/Oakland Raiders news cycle and yet surreally mirrors it is a testament to life imitating art. Prophetic writing if there ever was one, even if Kisan’s particular case does not match the Patriots’ story beat for beat.

Spencer having to accept the realities of league pressure and releasing Kisan despite wanting to give him a second chance, really makes you wonder about what really goes on behind the scenes. Like Spencer said… “Sometimes all you can do is save yourself. Sometimes you can’t even do that.”

If you missed tonight’s episode, it’s a must watch for the Kisan club scene alone. Cold, brutal, and real.

Be sure to check out a recap of last week’s Ballers on HBO! Joe Krutel blocked Spencer Strasmore from signing his GM of choice on tonight’s Ballers entirely out of spite.

Spencer Strasmore had his sights on making top agent Jason Antolotti as his GM on the Kansas City Chiefs on tonight’s Ballers… However, a chance phone call to his old business partner Joe literally buried the whole deal and salted the Earth. Jason was originally intrigued by Spencer’s offer, seeing being an agent as a young man’s game and wanting to take on a new challenge. He decided to pay a call to Joe to see what working with Spencer is like. Joe naturally, did not put in the good word for Spencer, calling him “a nightmare to work with.” To put insult to injury, Joe offered to buy Jason’s agency to the tune of $50 million dollars. As such, Jason turned down Spencer’s once in a lifetime offer and unknowingly placed the whole Chiefs deal in jeopardy. The wheels of investment were in motion, billions hinging on the prompt signing of Jason as GM. Now, Spencer looks to himself as GM.

Meanwhile, Reggie got Vernon a five year extension worth $80 million dollars… Who responded by saying, he thinks he wants to retire and has enough money already. Vernon was more worried that he might have messed up his eSports pro tryout in League of Legends despite being kind of talked down to by his interviewers. They mocked him by saying they don’t do sponsorships or vanity projects. Reggie did not like their tone but Vernon cut any leverage by saying he was willing to give up his other career.

Ricky received an invite to a pool party after a gym workout along with TTD. He would go on to down a seemingly endless amount of drinks while hitting on two girls there. TTD blocked his flirting attempt at the bartender by mentioning Ricky’s wife which enraged him. He would be pushed in the pool for his efforts in front of everyone. TTD called Dennis to take Ricky home as he was watching a private dance, if you get the drift.

Charles’ security let him know a loaded gun was found belonging to Kisan on the night of the incident. Although Charles’ wife attempted to convince him to look the other way because of the money involved and her pregnancy… A one-on-one chat with Kisan where he did not admit the truth to Charles made him end the business relationship. He wished him the best of luck in his career.

Check out how to catch a live stream of HBO’s Ballers over at HBOGO/HBONow!