Ben Stone [Josh Dallas] received devastating, nightmarish news on tonight’s Manifest Season 2 Premiere. A Maury Povich-esque title line if you get the drift. As Ben’s wife Grace Stone [Athena Karkanis] informed her hubby that he might not be the biological father of their next child. The moment happened during a routine checkup to see if Grace was pregnant, which she was.

A celebratory occasion soon turned to one of overbearing stress and disappointment for Ben, when Grace was asked how many times she’d been pregnant in the past. Grace replied twice, and Ben immediately told the nurse she’d had twins in the past, nervously laughing, so not two pregnancies… But no, Grace caught her hubby off guard by telling the nurse about a miscarriage she’d had recently. Ben Stone was noticeably hurt after learning his wife’s post-mortem “affair” with Danny [Daniel Sunjata] had extended into potential fatherhood. However, Grace desired to delay the inevitable and not call Danny immediately to inform him he might be the father of her future child. Surprisingly, Ben simply accepted everything in quick order and was seemingly not all that jilted by the news a couple of minutes later. Saying all the right things. 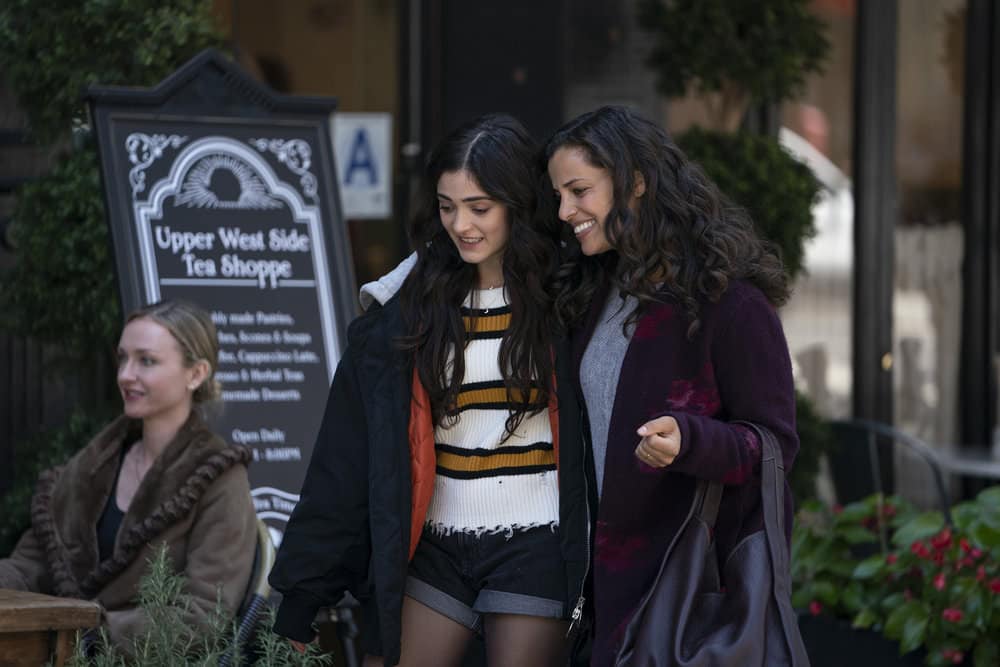 Daughter Olivia Stone [Luna Blaise] was overjoyed with the news of her future sibling, going out to lunch, grinning from ear to ear… Until the pair just happened to bump into potential father-to-be Danny, in true only on TV fashion. Danny attempted to make small talk but was clearly more in-tune with seeing what his chances were of getting Grace back. Grace chose to avoid the ‘big’ news in the Stone household about her pregnancy, setting up a maze of boring minutia. Not even hinting to Danny that he might soon be a father, delaying the inevitable just one more day. Olivia was more than a touch disappointed with her mother, and the situation as a whole. Wishing just once something could be joyous and simple, rather than complicated with dark overtones. Olivia even hinted that her mother’s child might be part of her ‘other’ family and not a Stone.

Michaela Stone excuses Zeke Landon for shooting her? The connection Tonight’s Manifest Season 2 Premiere opened with Michaela, Ben, and Cal Stone sitting aboard Montego Air Flight 828 once again as it nosedived. The experience was soon revealed to be Michaela Stone [Melissa Roxburgh] hallucinating the whole vision after being shot in the abdomen. Zeke Landon [Matt Long] would panic, trying to put pressure on the wound, believing he was making it worse. Ex-fiance Jared Vasquez [J.R. Ramirez] would seemingly save Michaela, only to later be unwelcome in the emergency room’s recovery ward.

Agent Stone would attempt to head back to work early in an attempt to convince her boss to stop the search for Zeke at her request. It didn’t work as planned. Meanwhile, Cal visited Zeke’s house and told him, he and Michaela belonged together because they didn’t have much time left.

Zeke would go out in the open, seeing Michaela one more time, and waving off the idea of running away. He called in the police to arrest him for what he did. Somehow the moment the two shared prompted Michaela to see a vision of a car with an X painted on it, over on the outskirts of town overlooking a bridge.

This vision combined with Cal’s words about ‘Saving the passengers’ led Michaela and Ben to find the exact car with a former passenger of Flight 828. Ben would have to talk down the former passenger from taking his own life in an effort to stop the voices, headaches and general tremors of visions. Trina Vasik [Samantha Steinmetz] seemed to have second thoughts about the matter but both agreed their kids didn’t deserve the fate of a “lake of fire.”

Michaela would take a peek down below on instinct and find a crashed car with six survivors had already gone over. Everything came together, and the passenger’s voices stopped. It appeared the vision was meant to lead to the family’s rescue. If Michaela had never encountered Zeke again, none of it would have happened.

The Major’s warning to Saanvi Bahl

The Major [Elizabeth Marvel] (or President Elizabeth Keane as you might know her on Showtime’s Homeland!) sensed Saanvi Bahl had feelings toward Ben Stone during a therapy session… But felt there was something not being said. She essentially evicted Saanvi from therapy, telling her she’d be there for her when she was ready to share but not now. Major gave Saanvi pamphlets for counseling groups in her place. She mentioned ethically, Saanvi is throwing her money away out of pocket, and this can’t continue on her watch.

Desperate for help Saanvi asked what if she opened up about Flight 828 with no verbal response but fairly clear peeked interest on The Major’s face. It appears these sessions haven’t concluded quite yet…

Missed the first season of NBC’s Manifest? No worries! All sixteen episodes of Manifest Season 1 are available for purchase on Amazon.