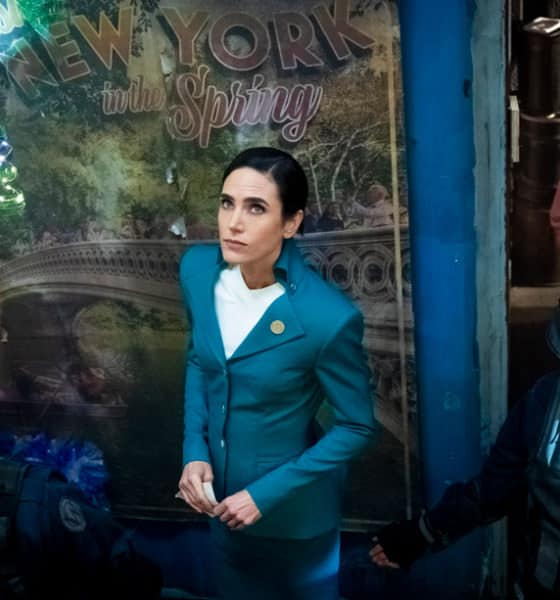 The ripple of war between rich & poor, divided by tickets and doors, is at the heart of TNT’s Snowpiercer.

This article contains spoilers for the Snowpiercer TV Series.

Her name is Josie Wellstead and providing adequate visual deception was not enough for Josie to fool Third Class’ inhabitants. The doe-eyed Tailie was caught not by sight or sound. Not a misplaced word for miles upon miles. Instead her work in Sanitation, known on Snowpiercer as a Tailie-only profession gave her away. Every sense needed to be accounted for to present as ‘Third Class’ and Josie did not foresee the ‘blunder’. A total devolution of humanity.

On Snowpiercer, attempting to ascend upwards in the social hierarchy without permission by Mr. Wilford is a mirage. An oasis in a desert, always in view but never reached. No matter how much one run towards it, arms stretched out.

2) ‘Punishment for thee not for me’

LJ Folger’s sham trial conviction was designed to imbue the lower classes with a sense of pride. Fill their imaginations with halcyon delights of equal share and justice under Wilford Industries’ law. But it was a ruse, a show not unlike Fight Night and every other circus on the train meant to placate the masses.

While the Tail loses fourteen arms in primitive brutality for the filmiest of cases, First Class walks in eternal impunity for murder. Judgement commuted seconds after the gavel is lifted.

Old Ivan’s greatest wish was simply to be left alone for a while, to have room to breath among a sea of people. However, space & privacy is a luxury only afforded to the nobility of Snowpiercer, while the Tail is left to crowd around… Living on top of each other, no business not public, no endeavor not known. Privacy reduced to thoughts jailed exclusively in the mind.

In the end, Old Ivan used his brief leisure time to take his own life. Exiting a labyrinth containing no formal exit, trapped in a permeant caste system.

LJ lightly delights at being the first to show Layton daylight once again, reveling in controlling ‘access’ to the sun. Layton expresses that Tailies haven’t seen the sun in a decade, indicating a potential lack of Vitamin D and a large susceptible population to illness.

Thus, the lower socioeconomic class of the Tail is hit twofold. Their very rights as humans are impeded on, living with no windows, shrouded in darkness… While weakening their immune systems.

Tailies are forced to consume low-grade protein bars made out of bugs or not eat at all. In fact, there was a time when the Tail resorted to cannibalism when Wilford Industries provided no sustenance in an effort to cull the population of stowaways. Meanwhile, the elite dine on the finest sushi available and subtly complain of secret extinction events, believing damage is being done to their menu choices.

Kronole, an off-shoot of the suspension drug utilized by Wilford Industries to keep criminality hidden away in drawers, has damaged the Tail. Though rampant usage is not exclusive to the Tail, the use of Kronole as a type of painkiller in opposition to a recreational party flavor mostly is. The Tail relies on Kronole to mitigate their pain, both physical and emotion, lest they end up like Old Ivan. Snowpiercer’s unregulated, underground market is in stark contrast to the careful balance Mr. Wilford/Melanie Cavill advocates for.

Officer John Osweiller exploited Tailie desperation to secure himself sexual favors from the residents. In one particular case shown on screen, a boy’s mother loses her arm in an exchange of ‘compensation’ to save his sister. The woman’s son heads to Osweiller and accepts a trade of a sexual favor for Kronole, Osweiller having a constant supply of the drug. The deed done all in a bid to help reduce the pain of his mother’s taken arm, taken unlawfully, without due process or a court of her peers.

A post-modern version of Hammurabi’s Law. Her humanity reduced to nothing the second she boarded Snowpiercer without a ticket. Civil Liberties left behind in the cold.

Wilford Industries and the eternal engine have impeccable trust to their brand, regardless of moral feelings to the logo. No one aboard Snowpiercer, Tail and First Class alike can deny Wilford’s ingenuity is keeping them alive. Thus, when the revelation is made that the Drawers are merely incubators for human experiments, and the suspension drug is not all that sophisticated… Josie Wellstead and the show’s audience itself is surprised by their own misconception.

The corporate label of excellence is instantly vaporized, Wilford Industries is not perfect and infallible, Mr. Wilford’s (or rather Melanie Cavill’s) words are not a new religious doctrine. In fact, the suspension drug is not that different than falling into a forced sleep cycle of Kronole addiction.

Fight Night was a ploy to distract Snowpiercer’s inhabitants from it’s unexpected Cow Extinction Event. The end of an entire species swept under the rug while two of the lower peasantry fight to entertain the masses. A ruse that allows First Class to simultaneously remind themselves of their gifted status as they watch the serfs punch away at each other. Watching from a secure station, the balcony practically a castle upon a hill overlooking a village. The aristocratic class enjoying goblets of wine from the top of a post-apocalyptic rebooted Roman Coliseum.

Even Melanie Cavill let her hair down for the first time for the occasion, taking a sip of wine, as she played back a pre-recorded audio tape of Mr. Wilford. An intricate facade built upon the foundations built on the veneer of widespread ignorance.

It might seem like superfluous minutiae to have an serving of ice cream after dinner but it isn’t. In the never confirmed but largely attributed words of Queen Marie Antoinette fueling the French Revolution, “Let them eat cake” or Let them eat brioches” as stipulated by Jean-Jacques Rousseau in Confessions. Either way the meaning is the same, a complete disregard for the plight of the lower classes.

While Officer Bess Till enjoys the comforts of Second Class through marriage to Jinju Seong, her peers go without. Access to even a sugary hit of dopamine reserved only for those designated as elite.

Be sure to watch Jennifer Connelly talks Acting, not looking back to replicate past works (Interview).