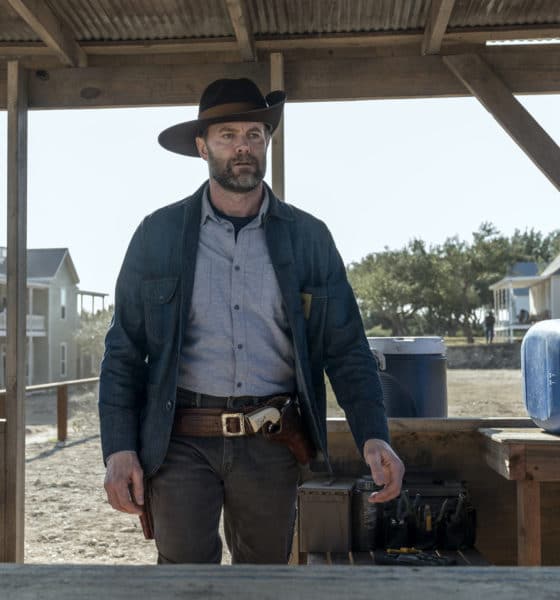 Tonight’s Fear the Walking Dead took a page out of the Deadwood playbook and had straight shooter John Dorie embrace his roots. But instead of being an aggressive client at the local brothel as Francis Wolcott, Dillahunt stepped into Sheriff Bullock’s shoes. It’s a shame Jeremiah Otto & Madison Clark weren’t there to join Dillahunt in what was clearly a western Deadwood homage… Just with zombies thrown into the mix.

In fact, rumor has it if you close your eyes and yell “c*********” three times fast at the bar in Lawton, you might just get served whiskey from Al Swearengen himself. A swig of whiskey or bourbon might be just what the doctor ordered for ole John’s toothache. He seemed to realize as such toward the end of Fear tonight when he recounted the end of his father’s law career. Consider Virginia as John’s George Hearst counterpart on Fear the Walking Dead, the antagonist who makes him question following the rules. 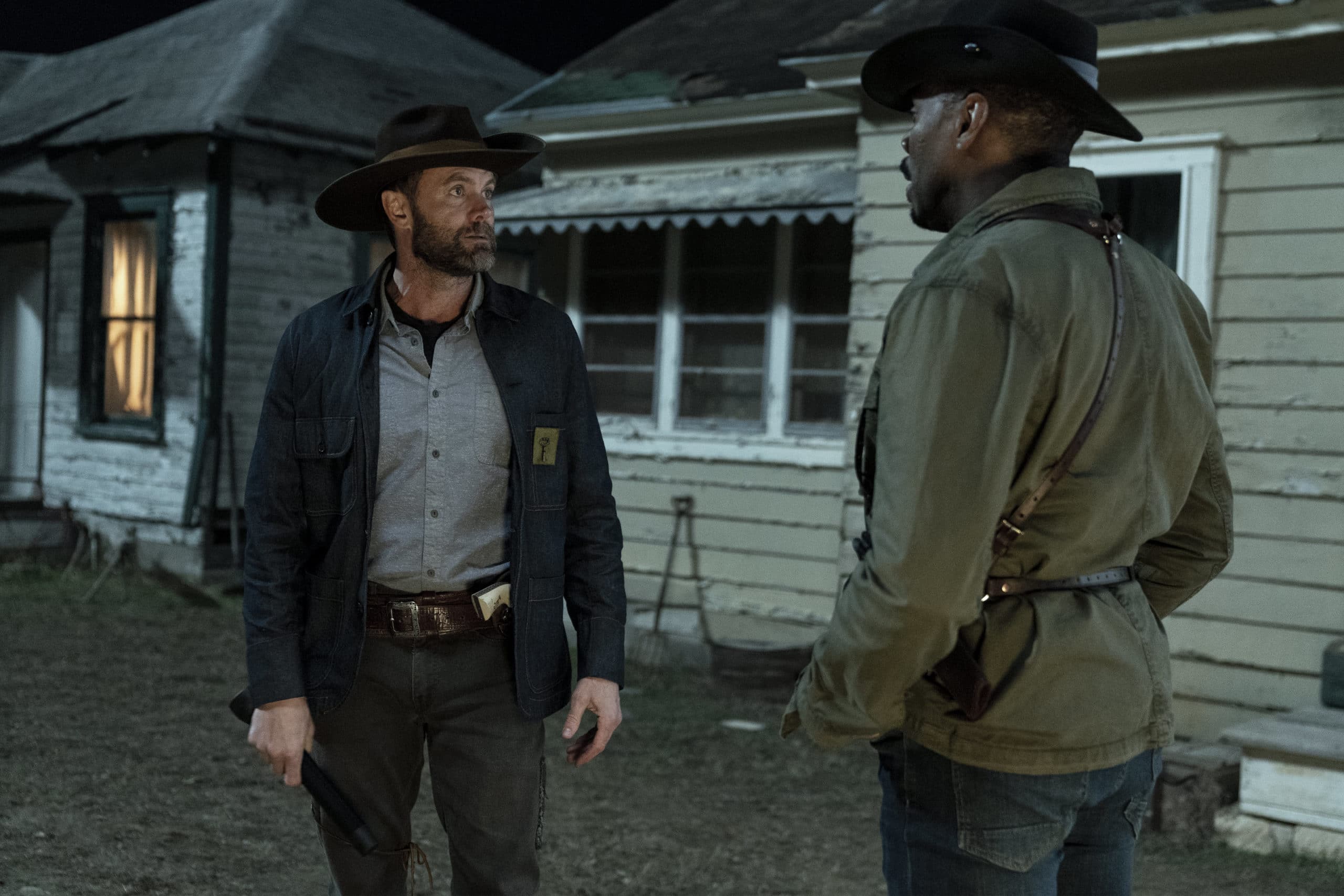 Victor Strand saved John Dorie from himself tonight, somewhat like Al Swearengen once did for Seth Bullock on Deadwood by trying to calm him down. The right thing to do is clearly not always the right decision in Lawton or Fear the Walking Dead’s sixth season as a whole thematically. Once you’ve began pursuing the truth, there’s no telling what fate has in store.

Strand’s choice to alert Virginia of Janis being a flight risk ended up bringing June back to John. But at the cost of his lifelong pursuit of decency. When Colby Minifie’s Virginia awarded a prized key to John on Fear the Walking Dead at the epilogue of tonight’s episode you could see he was ‘dead’ inside.

What the pursuit of good and moral conviction brings you

He immediately averted his eyes from Dakota’s who’d seemingly looked up to him earlier in the episode. No words needed to be said. There’s a price to be paid to be on Virginia’s rangers.

Sound eerily like The Governor to you? Lawton sure does share quite a lot of similarities with Woodbury. Both in the pursuit of safety and normalcy rather than just the the perception of it.

John Dorie convinced Virginia of that pursuit actually… In a way, John Dorie was just as responsible for Janis’ fate as Strand & Jacob Kessner. If he’d let the whole thing go, instead of being an upstaging citizen and showing Virginia the earring… Janis would have still been punished by Virginia for attempting an escape but not made an example of for murder. She would have lived. Dorie’s moral convictions caused those who cared the most about him to act accordingly, against his own judgement. Kessner hinted to John Dorie that June might not be impossible to ever see again during their conversation… Hint enough that he was in on it, despite denying telling Strand. Really, Victor took the punches and was almost shot for giving John Dorie what he’d lamented losing for months. The return and safe passage of his wife June back into his life.

John removing his rotted tooth after June returned was reminiscent of Shane Walsh shaving his head in The Walking Dead Season 2. The end of who he was, the beginning of who he is now. “The place (Lawton) ruins everything it touches! Just like Janis said.” It seemed kind of like John Dorie had more feelings for Janis than he let on, a bit like Martha Bullock & Alma Garret on Deadwood.

Even if he didn’t, he certainly would have never sacrificed Janis to get June back. John Dorie would have been willing to go the same path as his father, losing wife, family, and friends to do the right thing.

June could instantly tell something was off about John, “Didn’t Virginia tell you I was coming?” Virginia has rewarded the relatively even tempered John Dorie to placate him. Realizing the chaos simmering inside him. FTWD viewers how Virginia effectively rules, noticing who can be an asset, exploiting their talents, bringing them to the brink of madness… And if they pass the test, they are rewarded as one of them.

Most might not forgive but they’ll forget in the wake of newly given treasures. But it seems John Dorie might be more the Rick Grimes rising up against Negan types. The Seth Bullock types that are always in pursuit of being a righteous lawman. Whether it means their own life tattered and feathered or not. It seemed that while John Dorie was relived to see June again on “The Key” and it will hold him over from pursuing immediate vengeance… He will never trust Virginia, Victor Strand, or Jacob Kessner ever again. The bond is broken.

Lennie James‘ Morgan Jones will have an easy time to convince him of an uprising should the time come to unite once again. Much like Seth Bullock, John Dorie is a lawman not a bounty hunter.

Morgan said in the Fear the Walking Dead Season 6 premiere, “Morgan Jones is dead.” On “The Key”, it looks like so is the old John Dorie. That rotted tooth going in the sink could represent the end of his good nature.

On that same note, it’s good to see Victor Strand reverting to what made his character a great watch originally. Victor should never return to being 100% or even 80% good guy ever again, he’s simply a better character like this. Gives him some edge to work with. 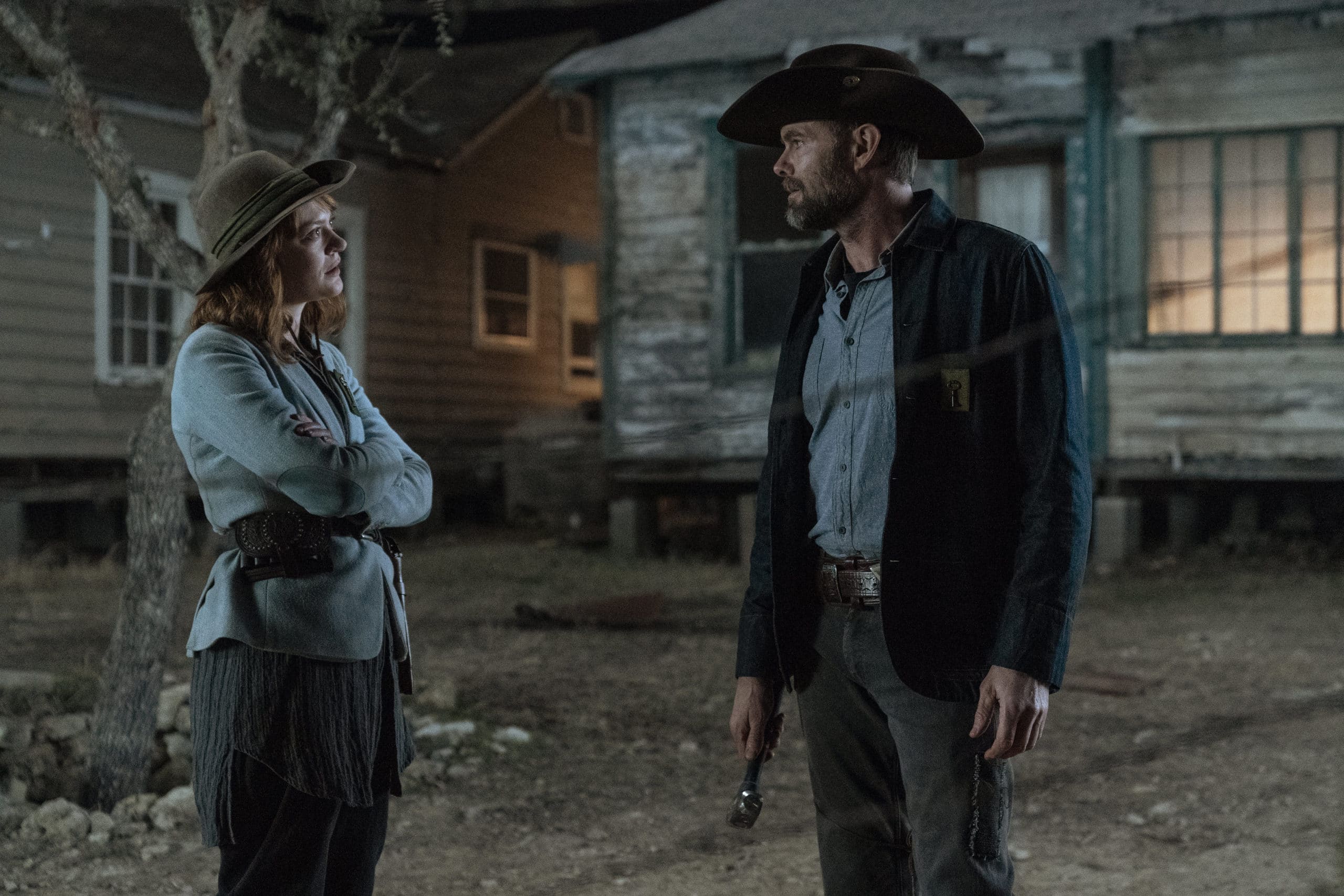 When will Fear the Walking Dead recruit Ian McShane, Timothy Olyphant, Molly Parker, Paula Malcomson and the rest of the Deadwood crew already for at least a cameo? It’s clear those involved with FTWD are big fans of the legendary HBO series as they’ve been hiring talent from there for years.

Add in a sprinkle of Wild Bill Hickok and Calamity Jane to Fear the Walking Dead and you’ll have something brewing in no time… Even without the label of South Dakota’s famous town. ‘Recurring roles’ has a good sound to it. One thing is for certain, John Dorie is right at home with these type of western Deadwood style FTWD episodes.

Credit to Garret Dillahunt’s acting work on “The Key’ for making his tooth cavity look exceptionally painful when he bit into that strawberry jam toast. John Dorie probably sent the whole Fear the Walking Dead audience for an extra tooth brushing during the commercial break.