This interview with Constance Wu and Charlie Grandy contains spoilers for VELMA Season 1. THE NATURAL ARISTOCRAT (NIR REGEV): Constance, what was your audition originally like for Daphne Blake?

CONSTANCE WU: My audition? Oh my God! They made me come in and audition about 12 times. I had to do three different screen tests with five different dogs, and then they decided to not have the dog.

So then I had to do- (laughs) I’m just joking, I didn’t have an audition process. CHARLIE GRANDY: (laughs) We offered it to Constance! Our hope, our dream was Constance. She was at the top of the list.

You never assume you’re gonna get someone like Constance Wu. So it was a real gift.

CHARLIE GRANDY: Yeah, so Constance wanted to do it. THE NATURAL ARISTOCRAT: Charlie, do you feel you were inspired by the early Adult Swim shows like Harvey Birdman, Attorney at Law and Space Coast: Coast to Coast?

CHARLIE GRANDY: I’m aware of those shows. I’ve seen them. I don’t know if they influenced my style.

I mean, I think there’s a version of this show that could have done that, where you kind of play with more of the original animation and with the original styles. But that was never gonna be an option.

Like, we had to do our own character design that couldn’t really look that much like the original. And so when we took that off the table early on, I think we wanted to get more into just making it its own, you know? THE NATURAL ARISTOCRAT: I noticed there’s so much breaking of the fourth wall on VELMA where they’re kind of actively speaking to the audience. Especially at the beginning of the first episode (“Velma) and really throughout the series. What are your thoughts on this direction? CONSTANCE WU: I thought it was really funny! (laughs) I really liked that about it.

CHARLIE GRANDY: Yeah, I think it’s good. You wanna earn it, you don’t want it to be just so self-referential.

I think especially as you ramp up towards the end and there’s so many loose ends to tie up, there’s less time to just kind of stand around and tell self referential jokes.

But I think it’s about finding that balance, you know? I think it’s good, you wanna have a bunch of different kind of jokes to tell, but the show is definitely built to comment on genres, especially the teen genre, the horror genre. So it’s baked into the DNA of the show. For me, if a joke feels worth telling, I’m gonna tell it. THE NATURAL ARISTOCRAT: Were you asked then intentionally to make the characters less like the originals in that way?

CHARLIE GRANDY: No, that was really what we wanted to do. We really wanted to flesh them out. It’s an origin story so you know who they are, you know, where they end up.

So the goal was to really sort of make everyone a little bit different. And so then the fun is, well, how do they become these characters that you know? And that’s really where the character design and the voices of the characters came from.

THE NATURAL ARISTOCRAT: So Constance… Did you enjoy Daphne’s kiss scene at the end of episode two? CONSTANCE WU: (laughs) No spoilers… But yes! And I’m such a method actor that I really, really did it. Not just in the voiceover booth. But for real!

(laughs) No, I just kiss my hand or a pillow, you know.

THE NATURAL ARISTOCRAT: What’s your favorite part of doing the voice acting for Daphne Blake on the HBO MAX VELMA series?

CONSTANCE WU: To be honest and I’m not just kissing up. I really like working with Charlie (Grandy).

CONSTANCE WU: Yeah, I really like his direction. He knows when he’s got it, but then he also knows exactly what to say to try something different that works with the comedy. 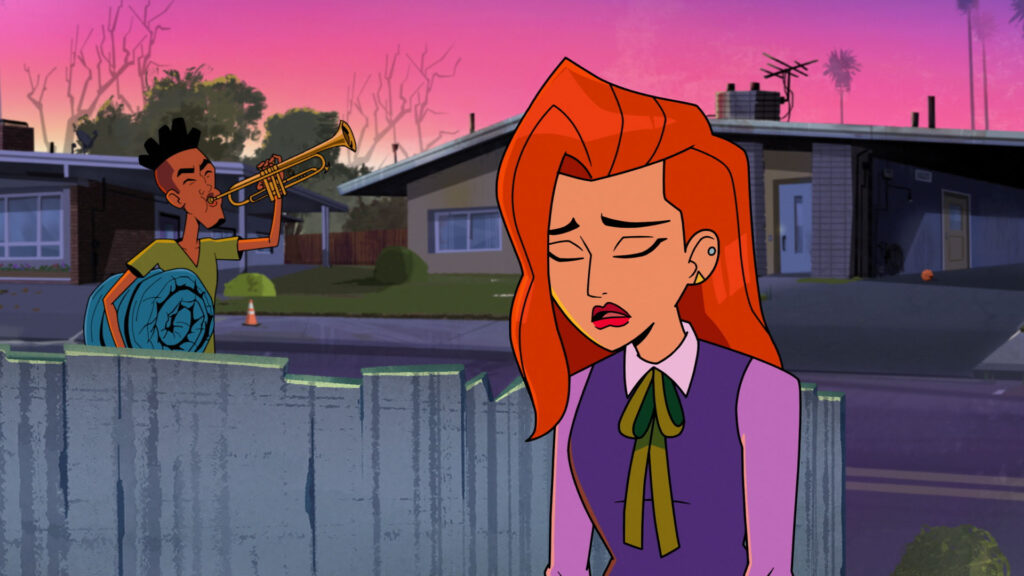 I’m not articulating it very well… But having done a network sitcom for over a hundred episodes, some people have the language to convey this. And then you get it and you get the rhythm of the joke and what you need to do and Charlie’s really good at that.

And so that’s been really fun because I like being funny and I like the funny script. So that’s been the best part. THE NATURAL ARISTOCRAT: Are you gonna be at New York Comic Con 2023 wearing a red wig and signing for Daphne fans?

CONSTANCE WU: I was at the last New York Comic Con actually!

CHARLIE GRANDY: We did New York this past year.

CONSTANCE WU: Yeah, it was fun!

THE NATURAL ARISTOCRAT: Thanks, it was nice chatting with you both.

– Stream the first episode of VELMA on HBO Max now. You can also subscribe to the HBO MAX Channel on Amazon to watch VELMA as well. Visit the Animation and Anime sections for the latest news and exclusive interviews with top industry talent.