World renowned manga artist Acky Bright spoke to The Natural Aristocrat® at Anime NYC about his secret formula to success: observing everything & anything, if he’ll one day collaborate with actress Bambi Naka, and whether only the top 1% of aspiring mangakas can make it in this field. THE NATURAL ARISTOCRAT (NIR REGEV): It’s often said how difficult it is to be a successful manga artist in Japan because of the intense level of competition. Is it really just the top 1% of artists that can make it in this field and other people should just give up?

ACKY BRIGHT: Compared to like 10, 20, 30 years ago, I think for creators, it’s getting quite easier to become a professional or become popular or become well known because of all these social media platforms that’s been around lately. Back then, if you were pursuing this career, you had to have certain supporters. Like a big client or companies to compete as a professional artist.

Nowadays, I personally don’t think that’s the issue. You have your tools and then you have your social media account. Anyone basically can get a chance to present their artworks. But on the other hand, I see people who seem to like drawing their artworks to get likes, a lot of likes instead of drawing for joy or for love.

I really hope that the younger, next generation of artists draw for joy. Like just because you’re having fun, that’s all that matters. THE NATURAL ARISTOCRAT: Speaking of social media, I noticed ‘Dreams on Fire’ actress Bambi Naka follows you on Instagram. Will you be collaborating on a project in the future potentially?

ACKY BRIGHT: Bambi knew my artworks for a long time and actually gave me compliments personally saying that she loves my artworks.

And I personally think that as an artist, as a person whose job is expressing emotions, I think she’s very, very intriguing and interesting.

She once said that maybe someday I would love to collaborate with you on the stories and the Instagram. So it’s quite possible. And if that happens, I’ll very gladly to take that opportunity!

THE NATURAL ARISTOCRAT: Can you describe your daily routine as an artist to make one of your pieces come to light?

ACKY BRIGHT: I try to observe pretty much everything that’s surrounding me, like animals or machines or cars or pretty much anything.

So that’s kind of my everyday routine. And my drawings contains a lot of sci-fi elements that don’t really exist in the real world. But then in order to make sense of the sci-fi, unrealistic world I draw and include realistic elements into the unrealistic-ness. So I try to observe pretty much everything anytime, everywhere. THE NATURAL ARISTOCRAT: What made traditional black and white your favorite style? Not quite like a manga… But the drawings are as much a piece of art as it is as a manga. So it really depends what I draw, but definitely, my roots are manga centered. And so that’s how I kind of interpreted all the colors into my black and white. 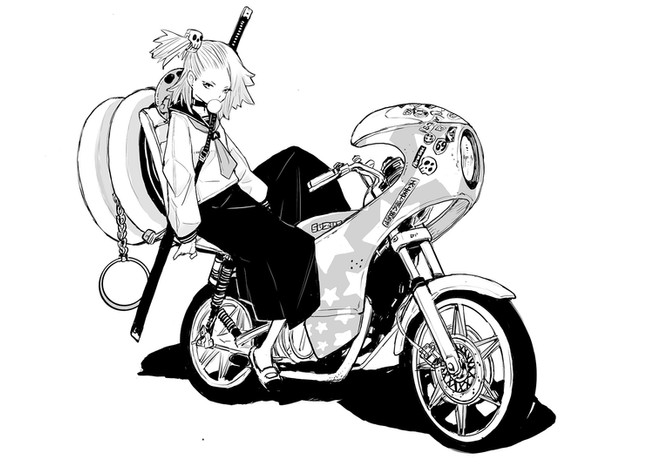 THE NATURAL ARISTOCRAT: How do you compare working on DC Comics properties to traditional manga? THE NATURAL ARISTOCRAT: How did you first get accustomed to scaling your drawings to entire walls?

ACKY BRIGHT: I draw all those paintings to present to people. So I think about how people react looking at the walls instead, it’s quite different from sitting on a chair and drawing on the desk.

I can have more images of people getting excited looking at the picture or drawings that I’m drawing on the wall. I actually did a live canvas drawing at Anime NYC 2022 and there was so much traffic and excitement.

People kept stopping by to shoot videos and take photos. It’s kind of an induction with the people. THE NATURAL ARISTOCRAT: The French comic book artist for Asterix, Albert Uderzo, had to retire later in life due to chronic hand pain when drawing. Obviously in this field, your hands are your life.

As an artist, how do you protect your hands/wrist from gradual damage & deterioration over decades of long working hours?

ACKY BRIGHT: So my secret is to just keep drawing! Whenever I stop drawing, that’s when my hands kind of get pain. So I’m just gonna keep drawing.

Then they’re good to go all the time, anytime. I was in LA recently and this person asked me, “Do you have insurance for your hands in case something happens?” (laughs) I said no. And then they were like, “Oh my god, what!?”

THE NATURAL ARISTOCRAT: You’ve cited artist Akira Toriyama as an influence because a ‘rock and a dragon’ can look ‘fearsome and adorable’ at the same time. Would you say then the combination of ‘menacing yet cute’ is a guiding principle of your art? ACKY BRIGHT: My signature element of drawing is kakkoii, which is cool, and kawaii. Putting them together, we call it kakkoii kawii. Those two opposite elements living in the same space, like living and death. Or like something very objective, very plain thing with the living thing.

These two different elements are like two sides of the coin. Letting these elements live in the one space together, that’s my style.

THE NATURAL ARISTOCRAT: Is Tokyo Ghoul one of your key influences and inspirations? The girl with the mask in your artwork feels kind of reminiscent. ACKY BRIGHT: It’s not necessarily, I’m not really influenced by it… But I love that anime & manga, personally!

THE NATURAL ARISTOCRAT: Thanks Acky!

– On YouTube? Be sure to comment on the interview below too and let your voice be heard! – Check out more of Acky Bright’s work by picking up his debut B/W art book on Amazon! 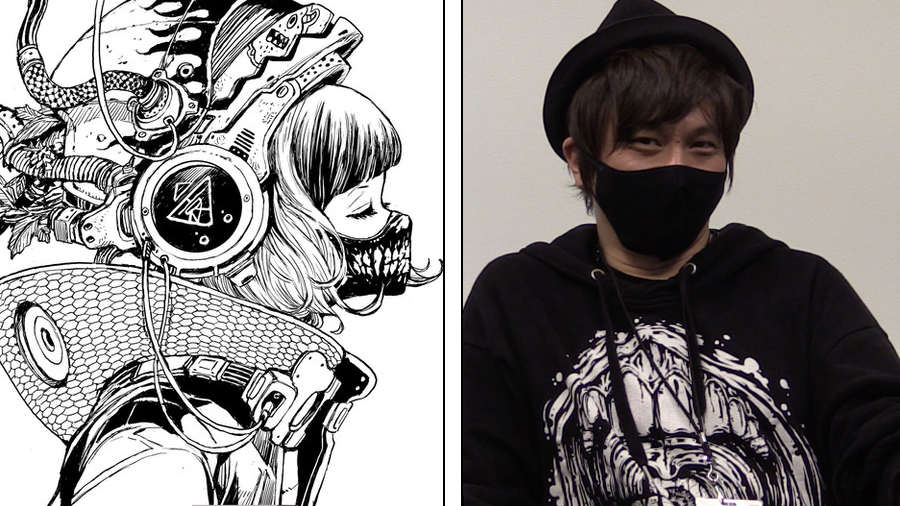 Be sure to watch & read the interview transcripts for:

Visit the Anime NYC section for the latest convention news and exclusive chats with the top artists and voice actors in the anime & manga industries!